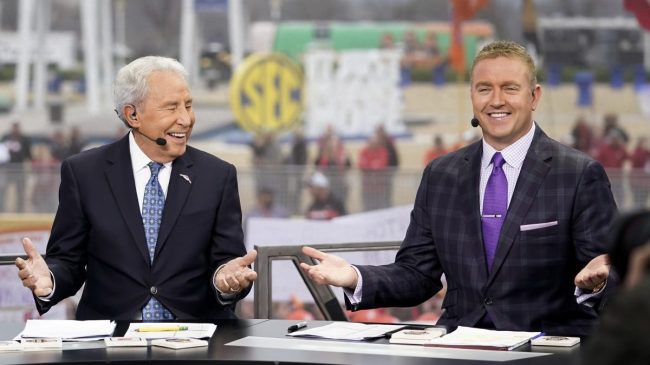 Any college football fan worth their salt will tell you that the best way to start a Saturday is with ESPN’s College GameDay.

The heart and soul of that long-running pregame show is undoubtedly Lee Corso. The 87-year-old is in his 35th year as a member of the show, and it appears he’s still as sharp as ever when it comes to brutal insults.

The former Louisville and Indiana coach was discussing Saturday’s in-state showdown between SMU and TCU when he lobbed an absolutely killer blow at SMU donors.

Earlier in the year, Corso and co-hosts Kirk Herbstreit and Chris Fowler were invited to speak in front of a group of SMU football donors at the Doak Walker Award black tie event.

One of the topics of discussion was the Mustangs’ big game against the rival Horned Frogs. Fowler asked Corso for an early prediction and he had this to say:

Corso not only picked TCU, but he then doubled down as Fowler hilariously scooted his seat farther away.

Feeding the rivalry is the fact that TCU coach Sonny Dykes left SMU to coach the Horned Frogs in the offseason. Given Dykes’ extravagant introduction, it’s hard to blame him.

The two teams will meet again on Saturday and Herbstreit brought the clip back up in a discussion with Corso. Rather than backing down, the wily old coach again picked TCU, then made a hilarious remark about securing the bag at the black-tie dinner.

At 87 years old, some may question whether Corso is still as sharp as he once was. But one thing is for sure, he’s still all about his money.

The Horned Frogs, meanwhile, end the game as 2.5-point favorites over the Mustangs.

Corso on saying SMU had “no chance” to beat TCU this year at an SMU donor dinner: “They paid us good money, too.”