Leonard Fournette Reveals What A Heckler Said To Set Him Off, And If True, The Dude Deserves A Beatdown 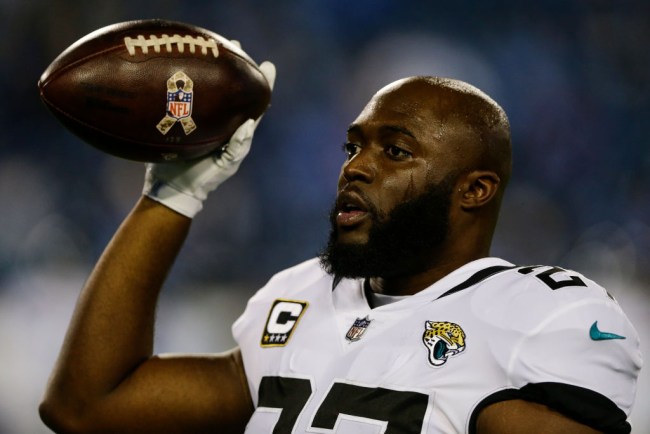 The Jacksonville Jaguars have lost eight of their last nine games and currently find themselves in the basement of the AFC South. A year after being a few plays away from going to their first ever Super Bowl and setting the table for a dominant season, the Jags are the laughing stock of the league. The NFL is a fickle beast.

The Jags lost their ninth game on Thursday night, getting brutalized by the Titans, 30-9, tossing another shovel-full of dirt on their casket.

But the loss was overshadowed by some post-game antics between Leonard Fournette and a Titans fan. In a video obtained by TMZ Sports, the Jags running back was spotted yelling at a fan before being dragged away by team staff, saying “You’re too old for that! I’m going to beat your ass!”

The Jaguars organization revealed that they would not punish Fournette for the incident, with coach Doug Marrone citing that his running back was subject to racial abuse.

“[Jaguars director of public relations] Tad [Dickman] showed [the incident] to me prior to our walkthrough today,” the coach told a media conference on Monday. “And then when I was out on the field after our walkthrough, I met with Leonard. He said there was a racial slur, so that’s what was told to me.”

Fournette later told The Athletic that the fan called him racist insults like “coon” and “servant.”

According to TMZ, the Titans have launched an internal investigation to find out if other people seated in the area heard any of the alleged slurs and are also working to identify the heckler.

The fan who shot the video told TMZ that he heard the heckler hurling insults at Fournette, but they were about the team’s performance. When Fournette was asking the heckler for his age, the fan said that the heckler responded, “I’m 30 to 9.”

The fan claims he never heard any racial remarks.

Even if a fan didn’t use racial slurs, they should allow Fournette and the fan to work out their differences for one minute in a boxing ring. The NFL can turn it into a halftime event next week and enjoy a ratings surge. Of course, they could mic up the fighters and see how much the fan is talking when he has a 6’0”, 230-lb. beast staring him in the face.