Les Miles Accused Of Inappropriate Relations At LSU In 2013, Was Reportedly Banned From Contacting Females 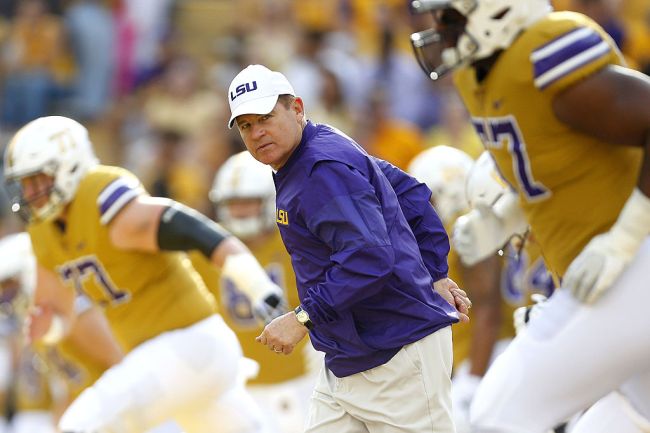 LSU released a report on Thursday obtained by USA Today that revealed former head football coach Les Miles was accused of texting female students, taking them to his condo alone, making them feel uncomfortable and, on at least one occasion, kissing a student in 2013.

These never-before-revealed allegations were made public by USA Today after it sued to see the records in January.

The investigation, which was done by an outside law firm on behalf of the university, did not find that Miles had sexual relationships with any of the women. Miles, the current head coach at Kansas, strongly denied kissing the girl and said that he was “simply mentoring young women at the university.”

One student worker told investigators that Miles had kissed her twice while they were driving in his car, after suggesting “that they go to a hotel together and mentioned his condo as another meeting place. He also complimented her on her appearance and said he was attracted to her.”

Investigators said they were not able to determine what happened between Miles and the student in the car. Miles denied kissing her. But even if they were to accept Miles’ version of events, investigators said, “it appears that he has shown poor judgment.”

The 67-year-old Miles was also accused by athletic department staff of saying that female student workers who were involved in football recruiting needed to be attractive, blonde, and fit. The workers that did not fit his criteria were to be terminated or given few hours, per the report.

The report details one worker, Student No. 2, and her father reported Miles to LSU’s director of football recruiting. According to Student No. 2, Miles was sending her Facebook messages and offered her a job to work for his personal business once she graduated. The two exchanged phone numbers, with Miles suggesting they use aliases, and he later started a conversation about meeting up with one another.

The student said Miles picked her up in his car, alone. He suggested they go to a hotel together and also mentioned his condo as another meeting place, the report says. Miles also complimented her appearance and said he was attracted to her. He parked his car behind the LSU athletic complex, she said, and kissed her twice.

Miles told the investigator the purpose of this meeting was to “talk with her more about her career aspirations and to tell her about a sports agent he had seen on a recent trip.”

The investigation found that the university issued Miles a letter of reprimand and required him to sign forms that stated he understood the school’s policies. LSU also ordered him to stop hiring co-eds to babysit, “cease being alone with them,” and attend a total of eight, hour-long sessions with an attorney in which he had to pay for personally.

The internal investigation into Miles is the latest discovery by USA TODAY, which has revealed widespread mishandling of sexual misconduct allegations by LSU’s athletic department and broader administration. USA TODAY’s reporting prompted LSU to hire outside law firm Husch Blackwell in November to audit its handling of dozens of sexual misconduct cases since 2016.

On Friday, the Husch Blackwell report is set to be released and is expected to shed light on more of Miles’ inappropriate conduct.

Miles was the head coach at LSU from 2005 to 2016. In January of 2013, LSU signed him to a two-year contract extension increasing his salary to $4.3 million per year. According to the report, complaints of sexual harassment surfaced one-month after he signed his new contract.

LSU fired Miles in September of 2016 and he was hired by Kansas in November of 2018.