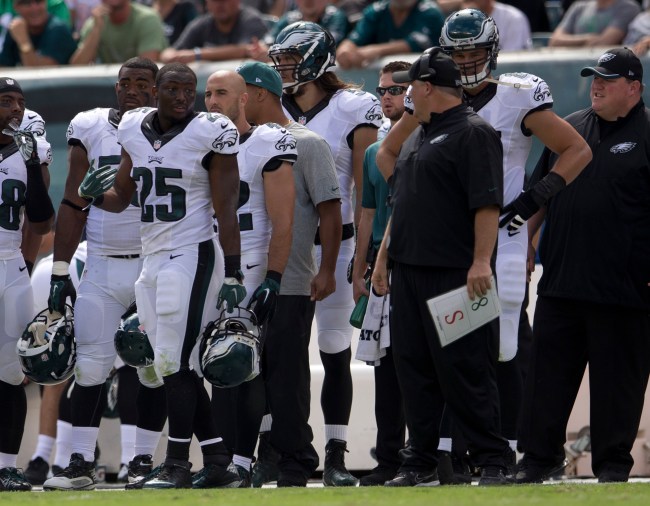 LeSean McCoy’s disdain for Chip Kelly runs deep. And long. Shady had every right to hold a grudge with Chip after he sent him to Buffalo in March of 2015 without even extending him the respect of communicating it with him first. Chip straight up treated the Eagles all-time leading rusher like a practice player. To add insult to injury, he dealt him for now-Miami Dolphin Kiko Alonso. Cold.

Despite Chip accepting the responsibility for handling it poorly and even saying “it’s always bothered me,” McCoy famously went on to say “there’s a reason [Chip] got rid of all the black players” and said his old coach “can’t [hand] shake shit” before playing the Eagles for the first time as a member of the Buffalo Bills.

Fast forward a couple years and McCoy is still holding the grudge with Kelly, who is now the head coach at UCLA. As a guest on NFL Gameday Morning, McCoy took an unprovoked shot at Kelly. Watch below.

LeSean McCoy takes a shot at Chip Kelly on the NFL Network. Says he has a lot of love for Philly now that the little short coach is with the kids where he belongs.#NFL #FlyEaglesFly #Eagles pic.twitter.com/4GSdweDaUa

“I got a lot of love for Philadelphia now that the little short coach is with the kids where he belongs,” said McCoy. “I got love for them.”

My first instinct is to label this petty. Butttt, I would be salty too if after rushing for 2,926 yards and 14 touchdowns in two seasons, I found out through my agent that I was being shipped to gloomy Buffalo in exchange for a lesser player. Now the Eagles have a shot to win their first Super Bowl in over half a century. Ouch.