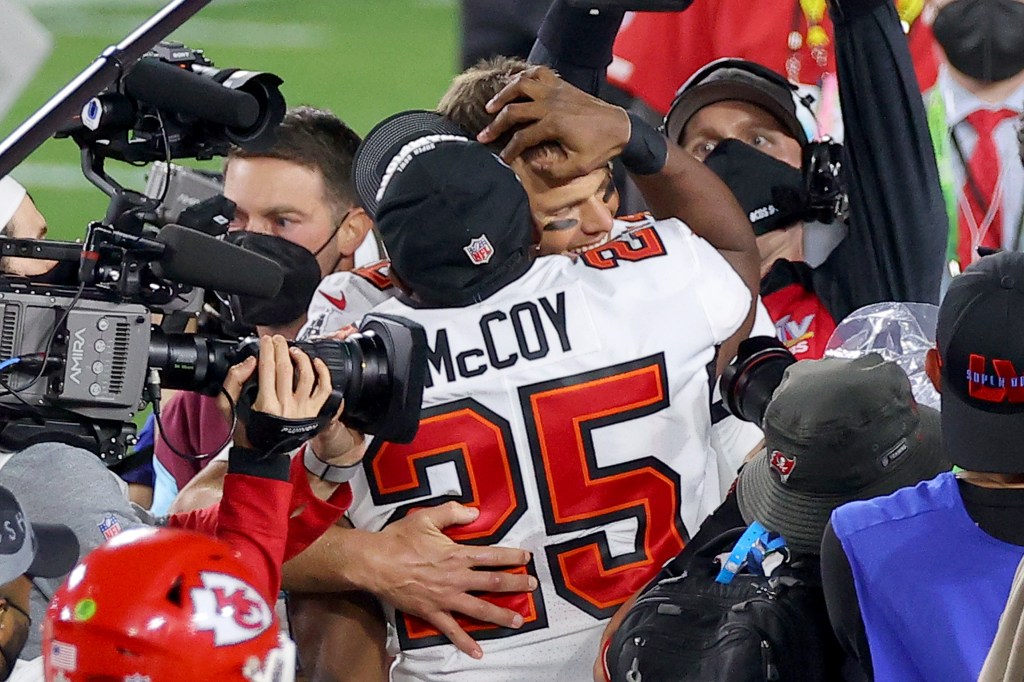 Reigning Super Bowl champion Tom Brady is under contract with the Tampa Bay Buccaneers for one more season. After that, he’d enter free agency once again unless Tom Brady and the Bucs work out some sort of an extension beforehand OR Tom hangs up his cleats and retires. At this point in time, coming off another Super Bowl win and doing it in his first year with a new team, the latter seems unlikely because Tom’s got several years of magic left.

Anyone with two eyes can see that Tom Brady is still playing at the most elite level in the NFL. He just won his 7th Super Bowl and was named MVP of Super Bowl LV. He’s the oldest to ever win a Super Bowl and age doesn’t seem to be slowing him down much at all.

Veteran running back LeSean McCoy believes Tom Brady could actually go on to become the oldest player ever in the NFL (at any position). Shady’s comments about Tom Brady aren’t shocking. This is actually how I expect anyone who comes in Tom Brady to talk about the magical aura he radiates. The man defies logic. SUPER BOWL MVP at 43 years old!

Here’s what LeSean McCoy had to say, via Pro Football Talk:

“He’s the only player that I’ve ever been around that, when he speaks, when he talks, I believe him,” McCoy said, via MassLive.com. “He could tell me, ‘Shady, go walk on that water. You won’t drown.’ I’m going to be like, ‘OK.’ He has that type of thing about him. And the way he works. When I was younger, I wish I worked as hard as he does. We just won a Super Bowl and he’s back training, doing little things.”

“He’s 43,” McCoy said. “He’s dialed in. He can play another five years. Just because, not only just the talent or the big arm and all that. It’s just like, he gets it. He gets it.” (via PFT)

Why couldn’t Tom Brady play another five years? At this point, the only thing that could potentially stop him is his family. A 48-year-old Tom Brady playing at 60% of his current skill level is still better than 80% of quarterbacks in the NFL and as we saw with the Buccaneers, Tom comes in and immediately makes every single player on the team better.

I don’t actually believe that Tom Brady will be playing in the NFL five seasons from now but I certainly think he could still compete at the highest level if he wanted to. He’s already the oldest starting QB in NFL history, why couldn’t he become the oldest player at any position?