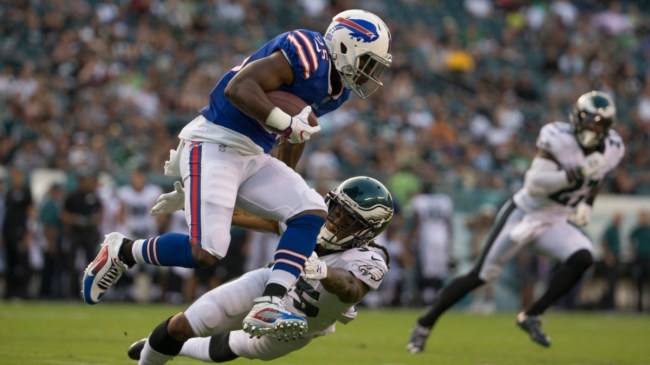 While there were a few teams heading into this season that were expecting to have some quarterback controversy, the Dallas Cowboys were definitely not one of them.

Dak Prescott had one of the league’s safer starting jobs entering the year, but after he was injured in Week 1, Cooper Rush stepped up for the Cowboys. He hasn’t lost since taking over as the starter and it has some fans talking about the possibility of him remaining the starter who Dak returns.

Today, the possibility of Rush playing great against the Rams and keeping the job was discussed on FS1’s “Speak” and LeSean McCoy hilariously compared that possibility to him being traded for Kiko Alonso.

If Cooper Rush balls out against the Rams and then Dak comes back & struggles, things will get very interesting in Dallas. 👀@CutOnDime25 breaks it down pic.twitter.com/xQbunIwPlO

Chip Kelly traded me for Kiko Alonso, whoever that guy is. Anything can happen in football.

That was not a trade that panned out for the Eagles. The Eagles traded McCoy for Alonso ahead of the 2015 season, reuniting Alonso with his college coach, Chip Kelly. Unfortunately, that reunion wouldn’t last long.

Alonso played 11 games for the Eagles in 2015, starting 1. He was then traded again, this time to the Miami Dolphins along with Byron Maxwell and a 1st round pick in exchange for the Dolphins’ first round pick. Chip Kelly was fired just before the end of the 2015 season after leading the Eagles to a 6-9 record.

Meanwhile, McCoy would go on to find plenty of success with the Bills. In 2015, he ran for 895 yards in just 12 games. He posted 1000-yard rushing seasons in each of the two years after that. Even in his 4th and final season with the Bills, McCoy was able to provide more than 700 total yards.

While that move did shockingly happen, the Cowboys benching Dak be real proof that no job is safe in the NFL.