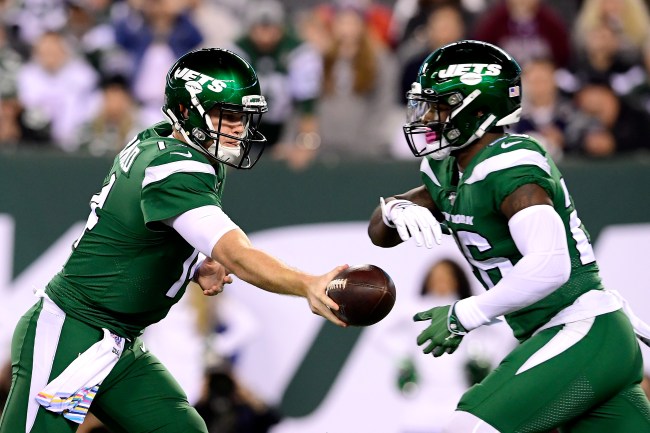 The best thing to happen to Sam Darnold is that everyone has shifted their focus from his historically bad Monday Night Football performance to a debate about privacy infractions.

ESPN aired a clip of Sam Darnold vocalizing what everyone who was watching already knew:

Weird. I would have thought Darnold was seeing the entire field a la Bradley Cooper in Limitless, ya know considering he finished with four interceptions, a fumble, and a 3.6 passer rating.

Nonetheless, Jets coach Adam Gase already admitted that he was “bothered” by ESPN for putting his franchise quarterback out like that and allowing for the media to control the narrative.

Jets running back Le’Veon Bell shared in Gase’s disappointment and took to Twitter to share his take.

The NFL screwed Sammy over…there’s not one player in the NFL who’s cool with having every sideline convo broadcasted to millions…there’s a reason we’ve never heard other QB’s frustrated on the sideline like that before…that’s crazy, @NFL did Sam dirty as hell https://t.co/2XmYXNTNoL

NY Daily News reporter and known Patriots hater Manish Mehta detailed how the mic’d up process works and claims that the powers-that-be at NFL Films were not happy with the release of the ghost comments.

NFL Films signed off on Sam Darnold’s “ghosts” comment to be aired. They had a rep on site. My understanding is that people high on NFL Films totem pole are not happy that their rep cleared this for air.

ESPN requested Sam Darnold to be Mic’d up. Jets were receptive to that. Welcomed it. NYJ had agreed to have Darnold Mic’d up for the Week 2 primetime game vs Browns, but he got mono. Jets did not have a rep sign off on “ghosts” comment to be aired.

Finally, ESPN doesn’t have any control over what gets aired or not from the Mic’d player. This was a decision made by an on-site NFL Films rep. Bottom line: Players say things like this on sideline a lot. Jets –and Darnold– got screwed here. The organization should be pissed.

I really do not understand how the organization is outwardly aghast over these comments and not trying to channel its energy towards not sucking.

The Jets are going to Jet, I guess.