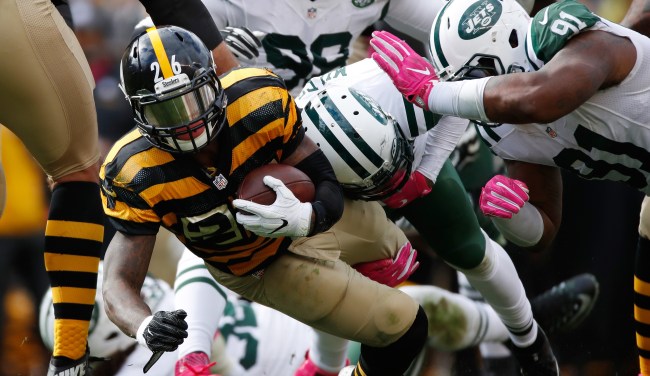 Between Antonio Brown being traded to the Oakland Raiders, Odell Beckham going to the Browns, and the Jets signing Le’Veon Bell, it’s been quite a newsworthy week for the NFL.

It’s also been, at least in the cases of Brown and Bell, a wake-up call to every other professional athlete that if you are a big enough diva then you can get all the money.

But that’s not why we’re here today. We’re here because after Le’Veon Bell agreed to a 4-year, $52.5 million contract with the Jets, people went looking through his old tweets (as people do), and discovered a whole bunch of tweets Bell has made about his new team.

Turns out, Le’Veon Bell has apparently been a Jets fan for some time now.

Keep on doubtin the jets, it's coo…game not over yet

Yup ima Jets fan…What can I say? I love #GreenAndWhite….lol

Yall all can be happy bout the eagles and what not…but at the end of the day, its all about the #Jets around here…

Man I pray that the Jets draft Kirk…I can't deal with sanchez anymore!

Remember when Leveon Bell tweeted $60 million wasn’t enough for him to run with the Jets? A tweet he’s since deleted. Pepperidge farm remembers. #NFLFreeAgency pic.twitter.com/voWaNhZYNZ

Congratulations, you played yourself.

Wait, I thought it was $100 million Bell needed to sign with the Jets…