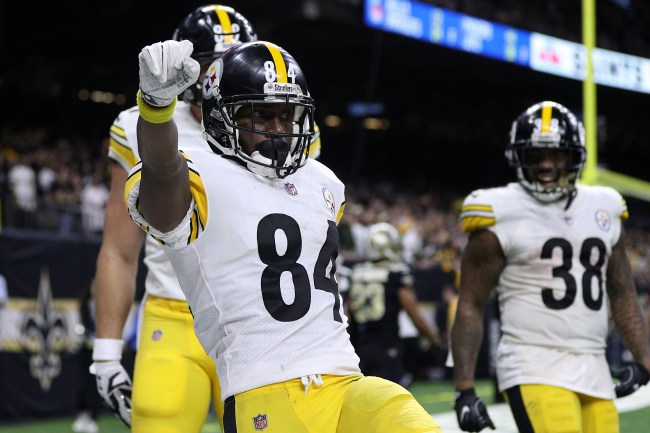 Antonio Brown is an Oakland Raider — and he seems pretty stoked about, according to his Instagram post from over the weekend where he was rocking the team’s hat. And, while Brown ultimately got his wish by forcing the Pittsburgh Steelers to send him packing, it wasn’t without a lot of drama and even more rumors. Hell, we even got a report late last week from Ian Rapoport of NFL Network that Antonio Brown was traded to the Buffalo Bills, which clearly proved being false, so the entire thing just seemed dysfunctional.

One team that the Steelers definitely didn’t want to trade Brown to was the New England Patriots, who are no stranger to trying to swoop in and trade for a player with the wideout’s ability. Even though Antonio Brown is a bit of a malcontent and prima donna, the Pats have made a living turning players just like him around, with the “Patriot Way” working wonders on guys like Randy Moss and Josh Gordon, to name a few.

While the Steelers didn’t want to help out their AFC rivals, according to a source, the franchise reportedly turned down a trade with New England that was so much better than the one they accepted with the Oakland Raiders. Take a look at what the analyst said below, via NFL_Access’ Twitter.

The Patriots reportedly offered the Steelers a 2nd and 4th round pick for Antonio Brown, but the Steelers wanted no part of trading with them, per source.

Obviously, at first glance, it seems insane that the Steelers didn’t do business with the Patriots. But, let’s be honest, why the hell would they want to do anything to help the reigning Super Bowl champs who have won the AFC title in each of the past three seasons? Still, Steelers fans are probably a little upset about this reported news after seeing what the team did accept for Antonio Brown from the Raiders.

Seeing as how the video game Madden ’19 totally rejected the Raiders’ offer to the Steelers for Brown, everyone seems to think that Pittsburgh got ripped off. Wonder if the tone would have changed had the All-Pro wide receiver had landed in New England for the reported offer instead, though.