Liam Hendriks Caught Swearing Like Crazy On Hot-Mic During All-Star Game: ‘I’m Sure That Made For Some Interesting TV’ 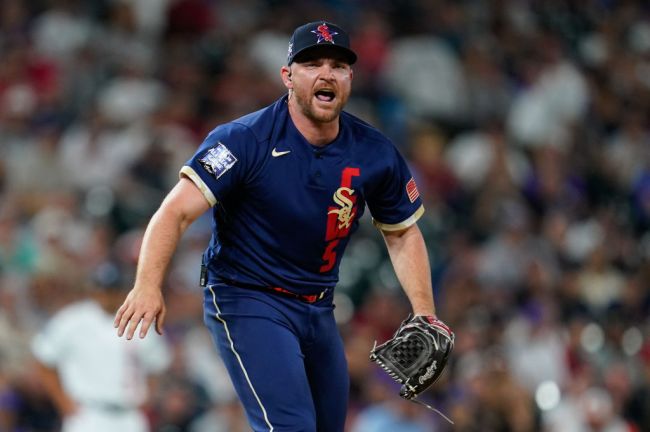 FOX mic’d up players throughout Tuesday night’s MLB All-Star Game to give fans an inside look and listen of the action. While Freddie Freeman and Fernando Tatis Jr. were two players that gave interesting insight, things really didn’t get entertaining until they mic’d up White Sox closer Liam Hendriks in the ninth inning.

Hendriks didn’t think his mic was working, so he went about his business as if nobody could hear him. This meant it was all gas no brakes for the gunslinger, and the curse words started flying.

While parents of young viewers may not have liked hearing those words from Hendriks, hey, that’s the authentic experience. Hendriks doesn’t hold back when he’s on the mound, and fans got a personal look at that on Tuesday night. This was in a game that didn’t matter all that much, either, imagine Hendriks in a real contest.

The mic even picked up Hendriks talking to catcher Mike Zunino saying that he didn’t think the mic was working because he hadn’t heard anyone from the booth talking to him.

Liam Hendriks said he didn't know his mic was live in the 9th since he couldn't hear the booth, but word soon reached him.

"I'm sure that made for some interesting TV," he said. "I hope the bleep-er guy was on point."

It probably wasn’t the greatest of ideas to mic-up a pitcher. There’s no way he’s actually going to talk to the guys in the booth while dealing on the mound. It’s a safe bet that this will be the last time we see a pitcher mic’d up in the All-Star Game, sticking with outfielders or a first baseman is the safer route.

Hendriks wasn’t worried about the mic picking up his bad language after he found out that the mic was indeed working.

Liam Hendriks on his ninth: "The fact I was able to throw the ninth and have a relatively eventful ninth, kind of plays into my personality a little bit. And not realizing the mic was hot and I couldn’t hear them and they could hear me was a lot of fun."