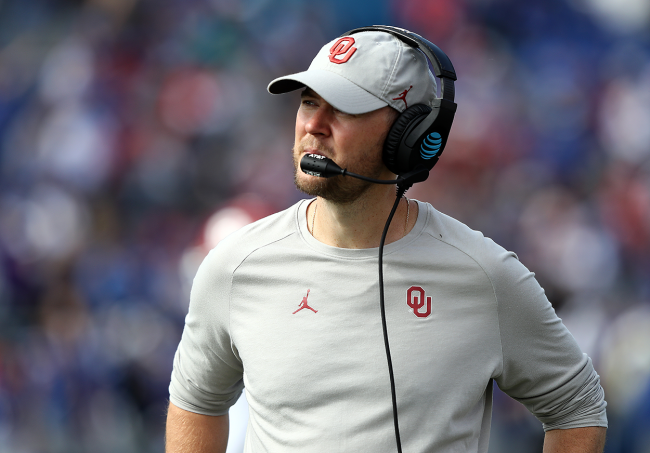 After Lincoln Riley accepted the USC job, he got up out of Norman in a hurry. In his wake, the former head coach of Oklahoma left behind two meat smokers.

The only problem was that the smokers did not belong to him.

Travis Davidson, a Sooners fan and (probable) booster, owns three restaurants in Tulsa. One day, he got in touch with Oklahoma’s director of recruiting and began to get involved with the program.

That eventually led him to helping out on the recruiting front and turned into him smoking 40 tomahawk steaks for OU’s ChampU BBQ recruiting event at Riley’s home.

We used them to smoke tomahawks for recruiting events. pic.twitter.com/98RL4QmEA7

As his services continued to be requested at various events, Davidson had an idea. Instead of lugging the smokers from Tulsa to Norman on short notice, Davidson decided to just leave two of his catering smokers at Riley’s newest home.

However, when Riley left for Los Angeles, Davidson’s smokers did not make the trek. Nor were they returned to him.

And then the recovery efforts began.

I don’t care what happens but @LincolnRiley needs to give @TravisSkol his smokers back!!

The first step in recovering Davidson’s smokers was making sure that they were still there. For all he knew, Riley could have had them scooped up and shipped off as a part of his near overnight move.

To find out that information, Davidson called the listing agent for the home. At first, the agent could not find the smokers. And then, eventually, confirmation came.

The recovery effort was a go.

Headed to Norman to try and get my smokers.

However, when Davidson and his friend went to meet the agent at the house, he was not permitted to go anywhere near the home.

Because of the massive social media outcry under the #SmokerGate, there was concern that Davidson brought with him an angry mob. He did not. He just wanted his smokers back.

After a negotiation and understanding between the two parties, they reached an agreement. A representative on behalf of the home ended up having to load the smokers out of Riley’s old house and bring them to the end of the gated neighborhood.

There, at that point, an exchange was made and Davidson got the smokers in the back of his truck and set off back to Tulsa. SmokerGate came to a peaceful end.

Ladies and Gentleman, we got ‘em.

They brought them to the front gate after seeing all of the tweets and didn’t want the Sooner Special Forces descending on the house.

Special thanks to @JaKeLivin12 with the Food Division of the Tactical Recovery Team. #SmokerGate pic.twitter.com/QhDMftD3oC

Word traveled quickly around the Norman community and as Davidson made his return trek home, people would pull up next to him and celebrate the success of the recovery efforts. It was a success.

Now that Oklahoma has hired a new head coach, once the dust settles, Davidson plans to reach back out and get involved again. This time, however, he will be sure to have a contingency plan if Brett Venables packs up and ships off in the middle of the night.