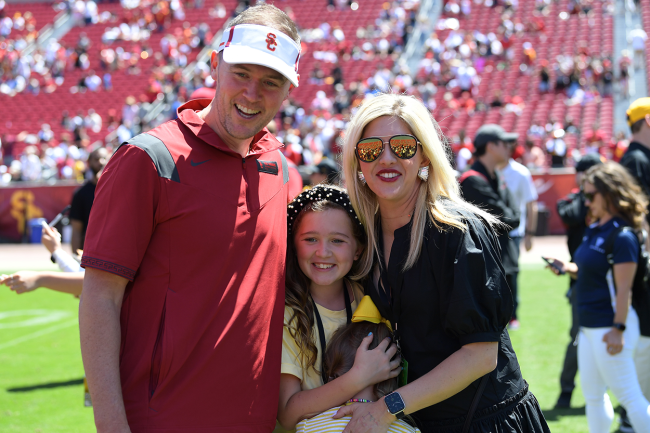 In a new profile with Ivan Maisel of On3 Sports, Riley spoke about life in California.

For starters, he dropped $17.2 million on a gorgeous ocean-facing estate that looks like it’s straight out of a movie. As for the most “L.A. thing” Riley has done so far, that would be near the top.

However, beyond buying a house, he told Maisel that his first real “L.A. moment” came when he was at the Super Bowl.

“That was probably the most L.A. thing I did,” Riley said to On3. “We were the odd people out. There were a lot of people that everybody in the world knows that were in that box. Then there was me and Caitlin.”

While in the box, Riley and his wife got to hang out with Wayne Gretzky and Kenny Chesney even asked him for a selfie.

Beyond the somewhat starstruck moment in February, Lincoln Riley told Maisel that he has found peace in his new-found anonymity in Los Angeles.

“We’ll just casually drive down to the beach and eat lunch and walk around, just like it’s nothing,” Riley said to On3. “The ease of being able to do things that we’ve never been able to do easily is the best way of saying it.”

Obviously, there is a lot more going on in Los Angeles than Norman, Oklahoma. Take the two schools’ spring game attendances for example. Sooners fans were packed into the stadium because that’s what you do on a Saturday, while USC fans were off at the beach or busy doing something else.

Ultimately, Riley likes that he can fly a little bit more under the radar out West.

“You’re a little more anonymous here,” he said to On3. “I’m probably a little bit more comfortable in having been in that role. Some of it is probably me growing up, too, and not just the setting.”

With all that being said, Riley is still a big deal in L.A. He is the head football coach at one of the most historic college programs of all-time.

However, to an extent, he is an even bigger deal on a national level than a local level. Nationally, Riley is one of “the” guys in college football. Locally, Riley is one of many “celebrities” who live in the City of Angels and there are quite a few names that are bigger than his own.