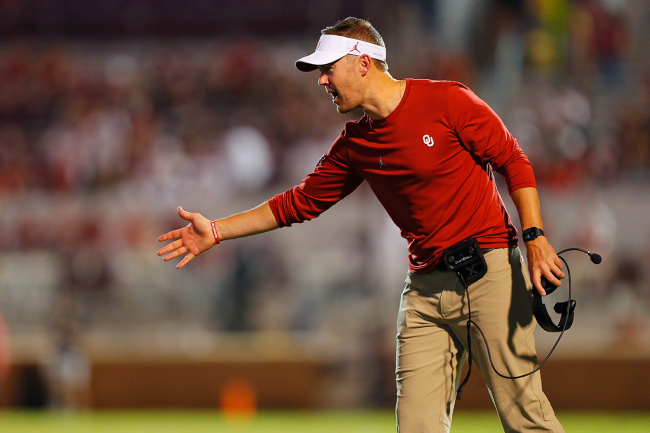 When USC football officially announced former Oklahoma head coach Lincoln Riley as its new head coach on Sunday, it changed the landscape of college football for the foreseeable future. Not only does it put the Trojans in a great position to find success on the field, but it sets up a shift in recruiting unlike we have ever seen.

That notion of off-the-field wins is already coming true. Riley arrived in Los Angeles on Monday morning, and his first flip is not long to follow.

Shortly after it was reported that Riley was headed to USC, his first former Oklahoma recruit made his intentions very clear.

Five-star running back Raleek Brown is from Santa Ana, California and had previously committed to the Sooners. He is in the Class of 2022.

Brown then made a comment that all-but stated that he will be flipping to follow Riley to the Trojans.

Oklahoma running back commit Raleek Brown told me Lincoln Riley going to USC changes everything for him.

News isn't official from USC yet, but seems likely that Brown will follow Riley to USC. Brown also said he thinks this will make a big impact on most other Cali prospects.

And Brown is probably not going to be the only one.

To be continued… #blessed💯 pic.twitter.com/j0kitXica1

Not long thereafter, 2023 four-star running back Treyaun Webb followed suit. He is the No. 5 back in his class.

And then, perhaps, the biggest hit came in last on Sunday. Oklahoma’s top prospect in the 2023 class decommitted as well.

Malachi Nelson is the No. 2 recruit in the country and a Los Alamitos, California native. Riley has already called him on behalf of USC, per reports.

All three players have re-opened their recruiting process and it would not be even the slightest of a shock if they were all to head West. Nelson and Brown, at the very least, are pretty close to a done deal.

In addition, 2023 five-star wide receiver Makai Lemon also committed to the Sooners under Riley. He is also from Los Alamitos, plays with Nelson, and is expected to be something of a package deal with his quarterback.

Expect him to join Nelson in staying home to play in front of the Coliseum crowd. It would be shocking if he didn’t, at this point.

To round things out, 2023 four-star wide receiver DeAndre Moore is also expected to follow the great migration. He, three, is also from Los Alamitos.

The pipeline from Southern California to Oklahoma is set to implode. Anybody that Riley had on his recruiting or commitment board is fair game to flip.