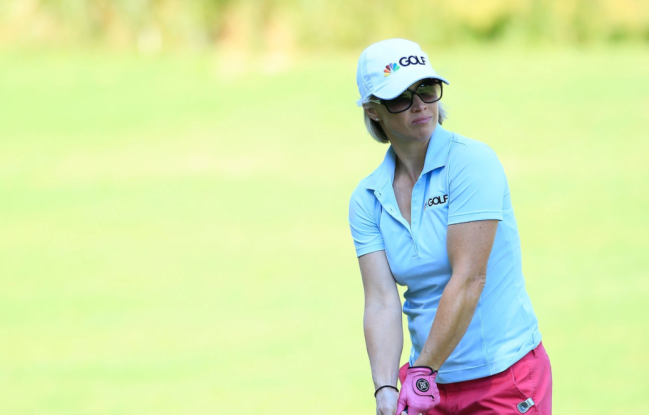 For anyone that’s plugged into the golf world and has watched the Golf Channel over the past seven years, you know who Lisa Cornwell is. The now-former Golf Channel host did a bit of everything for the network, from hosting studio shows, serving as a reporter, and offering up her insight of the game.

Cornwell’s contract ran out at the end of 2020 and since her time with the network has come to a close she has alleged mistreatment during her employment.

The first day in 7 years I'm not in a contract w/Golf Channel & am free to speak up for the many women who’ve been marginalized, belittled, berated & treated like second class citizens — including me.

The days of it being swept under the rug are over.#MoreToCome

Cornwell, with her attorney present, recently joined the No Laying Up podcast to discuss the allegations. Prior to laying out the allegations, she stated that “what she went through is nothing compared to what dozens of women at the network had faced.”

The allegations included her belief that executives actively tried to keep her off broadcasts, someone making fun of another analyst for struggling with anxiety, and what she describes as a “downward spiral” that began with an unpleasant broadcast experience alongside Brandel Chamblee.

The first allegation she brought to light during the podcast occurred during a company dinner at the 2016 NCAA Championships that was hosted by the head of Golf Central.

“The person leading the dinner, and there are 15 people there, he’s the head of Golf Central. We have a new analyst who’s had some anxiety issues on air, and he’s basically making fun of him.”

“I stoop up, he’s a friend of mine,” Cornwell explained. “I said ‘what are we doing? We don’t do this. This is not who we are. This was a big issue, it was hard for him, and we’re not going to sit here and make fun of it.'”

Cornwell later talked about a “downward spiral” that began back in 2018 when she was a fill-in co-host alongside Brandel Chamblee. She admitted that she made a mistake with a graphic during the broadcast which she alleges that Chamblee responded by making frustrated gestured during the program and wouldn’t talk to her after the show had ended.

She stated that the incident on the program was the fourth or fifth run-in she’d had with Chamblee and that she decided to call higher-ups at Golf Channel to discuss what had happened. One of the higher-ups was Geoff Russell, who she explained is friends with Chamblee. Cornwell said that she was told the incident would be looked into, but “there is a clear timeline from August 2018 to where things started to shift.”

At the end of 2018, Cornwell, who had regularly been a host of the women’s NCAA Championship, explained that she was told via email that she wouldn’t be hosting the next year’s tournament in her home state of Arkansas. She believes it had something to do with her run-ins with Chamblee: “100 percent, how could you justify it.”

What appears to have been the last straw came during this year’s ANA Inspiration when she reported that Xi Yu Lin and her instructor weren’t able to receive a certain set of Mizuno clubs she was fitted for two weeks before the tournament. Cornwell reported that Lin actually had to buy the heads of the club at a local store in Orlando and have specific shafts shipped in overnight.

The player leading the @ANAinspiration right now, Xiyu (Janet) Lin, put a new set of irons in the bag last week. @MizunoGolfNA wouldn’t give them to her. She had to buy them.

Cornwell reported about the situation on-air and alleged the next day Russell called her and started “cussing and screaming” at her. She was sent home from the event, and despite covering two other majors later in the year, she wasn’t allowed to interview another LPGA player on live TV.

Cornwell and her attorney Tom Mars filed a complaint with the Equal Employment Opportunity Commission in March of 2020.