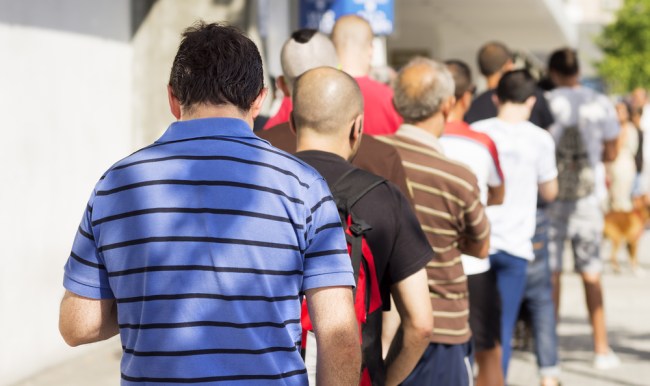 Last month, the benevolent purveyors of cheap pizza at Little Caesars made the world a promise: if a 16-seed managed to beat a top-ranked team in the first round for the first time in the history of the NCAA Tournament, they’d commemorate the victory by giving away free food. As you’re probably aware by now, the scrappy UMBC Retrievers fucked up brackets around the world by knocking Virginia out of the tourney, and as a result, the company announced they’d be giving away pizza on April 2.

Today, thousands of people around the country did a cost-benefit analysis and decided the best way to use their time was to stand in line for a meal they could normally buy with $5. I’m the last person to judge anyone who stands in line for things they enjoy— I frequently do so at the brewery near my place for the chance to pay money for something— but I can’t imagine standing in the ones that formed today for something that doesn’t get you drunk.

Noted sports business enthusiast Darren Rovell tweeted out a couple of videos featuring people who are really, really into standing in lines. Based on the evidence, it’s wild what some people will deal with for the chance to get some free shit (the promotion only ran for an hour-and-a-half and you had to place an order by 1 PM to be able to claim your prize).

Other people also shared their own pics and videos:

@littlecaesars update: Warren, MI 12:07 pm this one has a drive thru @darrenrovell pic.twitter.com/H0i9ThcezA

The line at my local Little Caesar’s. Probably 100+ deep. pic.twitter.com/c1WVFudSXI

Little Caesars is about 80 deep in line @wzzm13 pic.twitter.com/ojDFIhB7EZ

It’s not as ridiculous as the infamous Szechuan Sauce Incident but it’s pretty damn close.