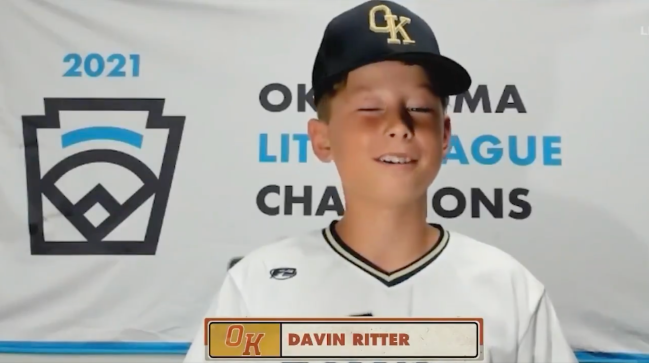 Step aside Big Al. Step aside Aaron Judge. Step aside Shohei Ohtani. Davin Ritter is the face of baseball— on the little league level.

The 11-year-old from Oklahoma is gearing up for him and his team to make a push for the Little League World Series championship. However, should his team not win the whole thing, he will head back to the Sooner State and be just fine.

During Ritter’s introduction he revealed his catcher/outfielder position and then shouted out his girlfriend(s?).

This one's for you 😉 pic.twitter.com/zlIVCDmjOz

There is no denying his swagger, but Ritter’s girlfriend shoutout is suspect. He might have a girl at home, but does he have more than one?

Either he is lying and playing to the camera, which is unlikely because of the swagger, or he’s talking to multiple girls. Ritter says “you know who you are” instead of shouting out her name.

Yes, he might be shy. Yes, he might want to keep his relationship a secret. OR he is shouting out more than one girlfriend in Oklahoma.

By saying that they know who they are, each individual girlfriend thinks that he is talking to her. But in reality, Ritter is making all of his girlfriends feel special individually without showing his hand.

No matter what the truth may be, Ritter has an undeniable swagger that matches that of Big Al and his dingers.