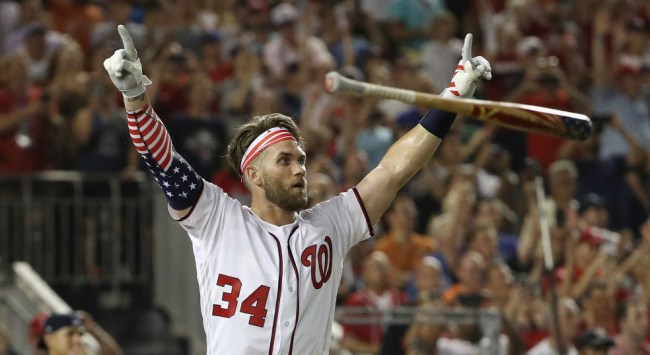 Hawaii and Georgia were locked in an incredible 0-0 duel in the 11th inning of their Little League World Series game. (Games are only scheduled for six innings.) That’s when Hawaii’s Aukai Kea came to the dish at Howard J. Lamade Stadium with a runner on first base.

On the first pitch he saw from Peachtree City’s Ben Traxler, Kea did this…

Kea’s blast over the left-center field fence gave his West Region Champions from Honolulu a dramatic 2-0 victory in the longest game by innings in Little League Baseball World Series history.

Of course, something as special as that deserved a special celebration and Kea also delivered on that count as well, doing Bryce Harper’s epic two-handed bat flip from this year’s Home Run Derby.

Major League Baseball, in a rare moment of fun, combined the videos of Harper and Kea into a mashup that he and his teammates will probably watch a few thousand times for the rest of their lives.

Imitating your heroes. Isn’t that what @littleleague is all about? pic.twitter.com/Wdz7z1HcTW

Hawaii wasn’t done there though, and neither was Aukai as they moved on to face the Great Lakes, Michigan team in their next game winning 8-3, moving to 2-0 in the tournament. For his part, Aukai went 2-for-4 at the plate to lead West in hits in the victory.

Hawaii is moving on!! 🤙 pic.twitter.com/9tBJSTXQJE

Next up for Hawaii is a game versus the Mid-Atlantic Region champs on Wednesday at 7:30 pm.