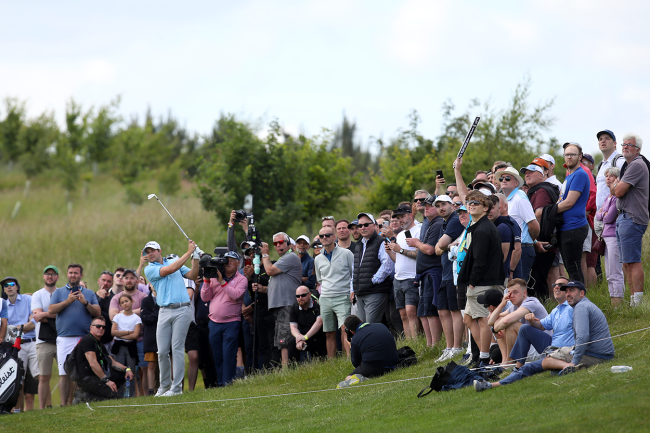 There has been a lot of controversy surrounding LIV Golf in recent weeks and it reached its pinnacle as it got underway this week. Many of the world’s biggest names have left the PGA Tour to compete in the new Saudi-backed golf tour, which has set off a significant chain reaction.

All of the drama can be found HERE.

On Saturday, LIV Golf claimed its first victim. An unsuspecting fan in the gallery got hit with an errant drive and went down in dramatic fashion.

As Peter Uihlein hit his tee shot on the Par-4 seventh hole, it immediately went left. He knew it right away and called “FORE!” within seconds.

The warning didn’t work. A small group of fans gathered just beyond the rough tried to cover their heads and get out of the way, but one man could not.

Although it’s hard to tell from the video exactly where the fan got hit, the ball seemed to nail him in the lower half and bounce back into play. Meanwhile, the man who got hit by the ball crumpled to the ground as if it was in slow motion.

First he went down to his knees, where he paused for a short moment. From there, he rolled over onto the grass, threw his legs up in the air and went full starfish. His reaction to getting hit looked like something out of a cartoon.

Take a look at the unreal reaction of the LIV Golf fan who got hit with an errant tee shot and fell to the ground:

Obviously, the fan’s health comes first. Hopefully he is okay.

Assuming that he is alright, outside of a scrape or a bruise, the man’s reaction is all-time funny. It appeared to be an incredible flop.

To make things even more hilarious— watch the video again and look at the man in the blue shirt who goes to check on him. To do so, it looks like he kicks the fan who got hit by the ball while he is on the ground as if to say “you good, bro?”