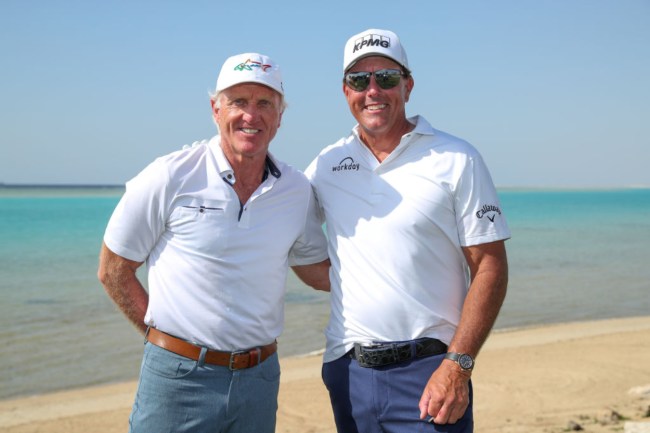 The biggest question surrounding the LIV Golf Invitational Series has been and continues to be who exactly is going to be playing in these events. With the first event set to begin on June 9, we’ve finally got an answer to that question. Well, sort of.

According to Bob Harig of Sports Illustrated, a LIV Golf spokesperson has said the field for the first tournament includes 15 of the top 100 golfers in the world. With player confidentiality agreements, the names of the players have yet to be released.

It’s worth noting the phrasing used by the LIV Golf spokesperson. They did not mention a handful of top 50 players or anything along those lines, instead, they went with the broad statement of 15 players inside the top 100.

Nevertheless, claiming to have 15 of the top 100 players in the game is a strong start, and certainly exceeds the expectations of many critics of the Saudi-backed breakaway tour.

Outside of what players are going to make the leap over LIV Golf, the next-biggest question is what actions the PGA Tour and DP World Tour might make if a player jumps ship.

Both tours have been very clear that there would be severe repercussions if players made the move, but given the location and time of the first event, players are expected to be granted a release to participate if they desire.

According to Harig, with the tournament being played overseas at Centurion Club outside of London, players “could expect” the release they desire from the PGA Tour.

More than 70 players have reportedly registered for the first event, but the field is capped at 48 players, therefore some will be turned down.

How LIV Golf Plans To Lure Golfers To Play In Events

Greg Norman, the CEO and commissioner for LIV Golf, plans to use these purses to lure players over, and he’s been very honest about that tactic.

Some notable names have been linked to LIV Golf in some capacity, including Phil Mickelson, Bubba Watson, Ian Poulter, and Kevin Na.