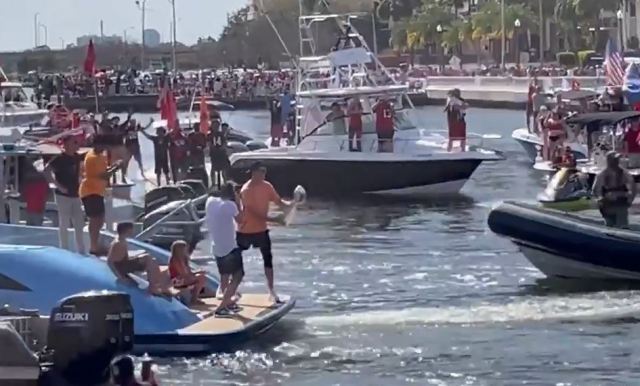 Everyone cheered Tom Brady when he threw the Lombardi trophy during the Bucs’ championship parade except for one woman.

Lorraine Grohs, the daughter of Greg Grohs who was the master silversmith behind the first Vince Lombardi Trophy, blasted Brady for tossing the trophy and wants him to apologize for disrespecting her father’s legacy.

Lorraine Grohs says that Tom Brady's trophy toss is insulting to her family's legacy and would like an apology.

She is the daughter of Greg Grohs, the master silversmith who crafted the very first Lombardi Trophy. #GoBucs pic.twitter.com/sdElEcHmgp

It just upset me that this trophy was disgraced and disrespected by being thrown as if it was a real football,” said Lorraine Grohs. Grohs is the daughter of Greg Grohs, the master silversmith at Tiffany and Company from 1967 to 1994, who crafted the very first Vince Lombardi Trophy.

“I have a big history of this trophy being made by my father and it’s such an honor and I know all the craftsmen that made it when my dad was there also at Tiffany’s and it takes a lot of hard work,”

“I personally would like an apology, not just to me and my family and the other silversmiths but to the fans, all the football fans the other team players.”

Grohs also described sleepless nights, feeling upset that the passion and pride her father put into the trophy was taken so lightly.