Founded Less Than A Year Ago, Long Island University Won Its Inaugural Division I Hockey Game In Overtime 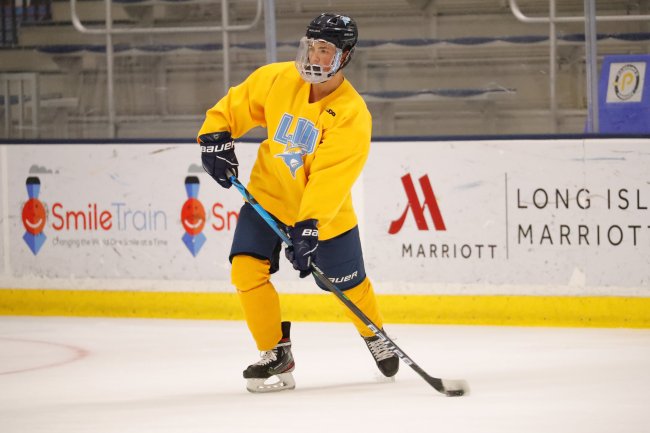 On April 30, 2020, in the heart of an unknown period amidst a global pandemic, Long Island University announced the addition of Men’s Hockey to its athletic department. The Sharks began a nationwide coaching search right away and landed on pedigree, hiring Brett Riley. At 29 years old, Riley became the second-youngest NCAA hockey coach on the Division I level and the fourth in his family to coach collegiately.

Riley’s grandfather Jack took the United State Olympic team to a gold medal in 1960 and coached Army for 35 years before his son, Brett’s father, took over. He coached the Black Knights for 9 years and passed the position to his brother, Brett’s uncle, in 2004.

For the Sharks to simply take the ice was an incredible achievement. To assemble a staff and an entire team during the COVID-19 environment, is a remarkable feat. After a month-long delay to the season’s start, and an extra week added on after Riley’s uncle and Army had to cancel its season-opener due to virus concerns, LIU finally dropped the puck on its inaugural season on Thursday against Holy Cross wearing some sweet uniforms.

The moment you’ve all been waiting for… pic.twitter.com/IBFEWhQmkH

Freshman Gustav Mueller scored the first goal in the school’s history at the 7:15 mark of the second period and both teams traded goals through regulation— playing to a 2-2 tie.

GOOOOAAAAAALLLLLL!!!! First goal in program history goes to @gustavmueller99, with an assist from @christianrajic!!! ALL TIED UP! 1-1 in the 2nd period 🦈🦈 pic.twitter.com/sSrCAcFndf

But the fireworks were not done there. 203 days after the program was announced, Long Island got its first win on a game-winner with just under two minutes remaining in overtime.

This winning thing is fun. We may stick with it.
🦈@liuathletics pic.twitter.com/1jsB3vLQH3

It’s still going to be a long road for the Sharks to build success from the ground up, but what it has done in less than 12 months is impressive. To cap the long offseason with a win makes it even more special.