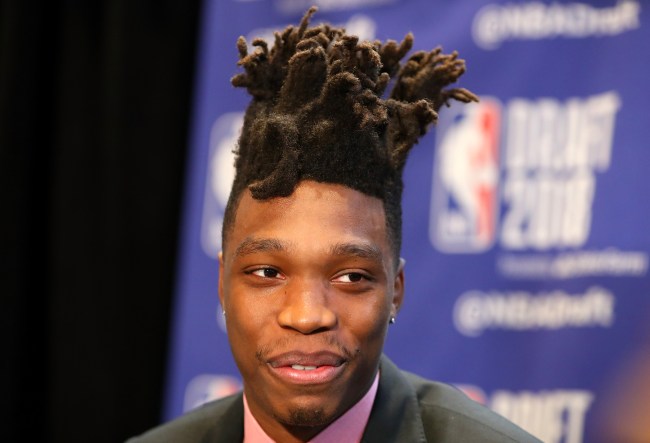 The San Antonio Spurs picked University of Miami product Lonnie Walker IV with the 18th pick of this year’s NBA Draft. Before the 19-year-old has played one professional regular season game, he has one controversy to his name.

Yesterday, as Americans were getting loaded on domestic beers and chomping down hot dogs in celebration of all that is American, Walker took to Twitter to offer a contrarian point of view. He tweeted, and then deleted, the below:

“Will never celebrate 4th of July. Know your history!! and stay woke.”

As you may have guessed, hundreds of people who saw the tweet dropped their cole slaw and took offense to the McDonald’s All-American’s tweet. Check out some of the backlash below:

You met David Robinson not too long ago… do you think he's "woke"? pic.twitter.com/7x7SRzwC5A

An American millionaire at 19. He's one of our best/brightest and this is what social media has done to his worldview. We r filling our young people w/too much animosity and resentment. I don't blame Lonnie. I've been 19 and rebellious. Glad I wasn't influenced by social media. https://t.co/aX2dt9OWu4

Well FU then, Spurs or not, go ask to be traded to the British Empire, I'm very sure the UK has a basketball ball team. I live on the Texas border with Mexico and I'm glad such country exist. Can you tell me of a country with no violent history so you can go there and be proud?

You were just drafted in the first round of the NBA draft and given guaranteed millions by the country you won’t celebrate. Please, then, convince us of the sincerity of your wokeness and forego all those American riches. https://t.co/wm5wss1rgm

Then move to another country

you rattling these folk and only been in the league a few weeks, love it pic.twitter.com/HRlIe3wvTY

Love when a dude uses his freedoms and citizenship as a way to make millions and then trashed the country that allows him to do so. Immaturity at it's finest.

Walker could have just tweeted this to be an irritator. Back in May during the NBA combine in Chicago, Walker dropped a truth bomb about the nature of the earth:

“The earth is not flat, in my opinion, but the earth, on my conspiracy, the earth is definitely an illusion.”