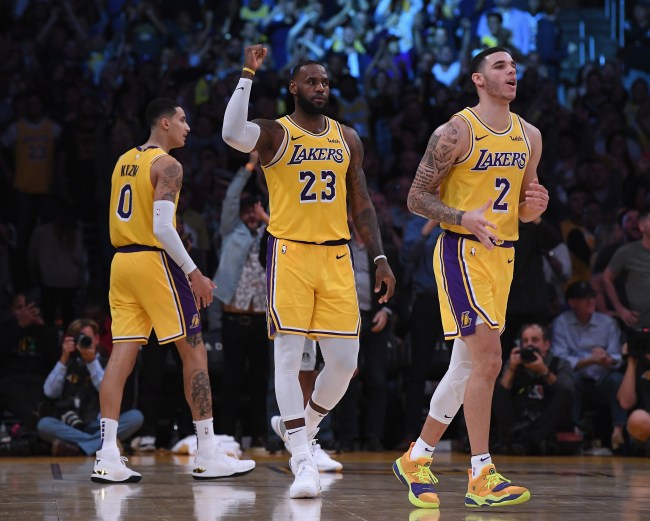 Lonzo Ball was one of the unfortunate players injured during the Los Angeles Lakers’ pathetic season, which, blended with all sorts of internal dysfunction, led to a sixth-straight year without reaching the playoffs. Of course, this wasn’t how things were supposed to go for the Lakers after signing four-time NBA Most Valuable Player LeBron James last summer, who gave the iconic franchise hope and had fans thinking a Western Conference Finals appearance was bound to happen.

Well, we know how that turned out.

Given all the drama that happened with the Lakers this season, they ended up right where they’ve been the past few years; in the NBA Lottery. And, while James’ first season in LaLa Land didn’t go as planned, anyone who thinks that he didn’t at least try to change the culture early on might be mistaken. That’s because Lonzo Ball detailed a story about the first 5-on-5 team scrimmage that James played with his new teammates last summer, and, well, it was a complete ass whooping.

Lonzo Ball, talking with House of Highlights, didn’t just say that LeBron dominated the game, but the point guard revealed that LeBron scored all 21 points of his team’s 21-7 victory over Ball’s. Uh, holy crap, man, James took no prisoners in showing his new guys that he’s all about winning. Take a look at the video below.

If this is true, it’s absolutely bonkers. Sure, it was only a scrimmage and guys probably weren’t taking it too seriously, but it’s obvious that LeBron James came in there and tried to make a statement — which he definitely did if Lonzo Ball’s story is 100 percent fact. I really wish there were video of this, because I’m interested to see if James just hogged the ball, dipped his head and drove to the basket, or if none of the other guys on his team could make shots, so he just said, “f*ck it,” and decided to take over himself.

Regardless of how this all went down, the fact that LeBron James was running circles out there around Lonzo Ball’s squad is hilarious. The guy’s clearly still a freak athlete, but, c’mon, how can these 20-something dudes let the eldest statesman of the group play them this badly? No wonder the Lakers sucked serious booty this year if this was going down during the team’s first scrimmage.