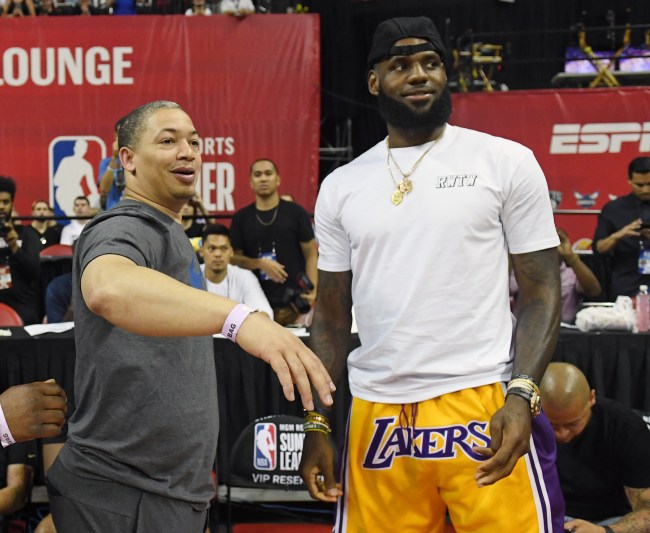 The Los Angeles Lakers continue to search for their next head coach, but, right now, all signs are pointing towards Tyronn Lue. Lue, who has a relationship with LeBron James from coaching him and winning an NBA title with the Cleveland Cavs, is also a former Laker himself, which, apparently, means a hell of a lot to the team’s brass — especially owner Jeanie Buss. In fact, according to ESPN’s Adrian Wojnarowski, Tyronn Lue talked about his love for the Los Angeles Lakers in his job interview and, because of that, may have pushed himself as the No. 1 candidate for the role.

Wojnarowski, while appearing on his latest episode of “The Woj Pod,” briefly mentioned how Lue’s admission and honesty about the Los Angeles Lakers won Buss over, with the owner always trying to keep things in the family, so to speak, and bring on people who bleed purple and gold, and who are passionate about the organization as much as her dad, Dr. Jerry Buss, was. Here’s what Woj had to say.

”I do know in the interview process, when he (Lue) sat down with Jeanie Buss, he certainly struck the right chords with her I’m told. Jeanie Buss, for better or worse, it means something to her to hire people for high-profile jobs who have a connection to the Lakers, who love the Lakers like her father did…

“They’ve always tried to keep it in the family when they could. That’s why Magic (Johnson) was president, that’s why they’ve hired ex-Lakers all over the place. I know Ty really made a case for how much the Lakers mean to him, what it meant as a player to win a championship there, to play there and now the chance to come back as the head coach, and really struck that chord with her.”

Whether it’s playing or coaching the Los Angeles Lakers, there’s a ton of scrutiny, so it makes sense why Jeanie Buss would want to hire someone who understands that kind of pressure. But with many around the league worried that the franchise might give LeBron James too much control should they hire a coach with a relationship with him, like Tyronn Lue, some already wonder if this is would be the smartest decision. After the dysfunction that happened all season long — which ended with Magic Johnson abruptly resigning before the last game of the regular season — the team needs to make the right move when hiring its next head coach, so it’s a big decision.