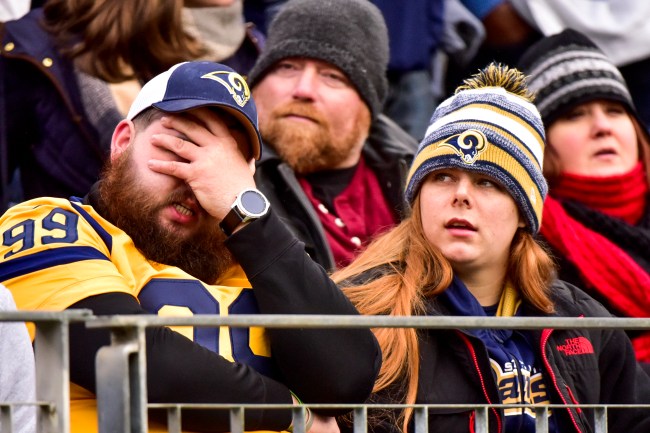 By now, every sane person should understand that inking a preemptive championship tattoo is about as safe a bet as tattooing a celebrity marriage on your body. Odds are, your team will choke and Chad Kroeger and Avril Lavigne will break up. Sadly.

The latest franchise to bear the burden of an overconfident fan is the Los Angeles Rams. Last season, the Rams reinvigorated a scattered fanbase by finishing the regular season with an 11-5 record, the franchise’s first non-losing year since 2006. The team would be bounced out of the playoffs in the first round by the Atlanta Falcons, but with Offensive Player of the Year Todd Gurley and Defensive Player of the Year Aaron Donald returning, the Rams are projected to win at least 10 games this year, per Odd Shark’s estimation.

But 10 games won’t win you a Super Bowl and gigantic strides on the offensive and defensive sides still won’t guarantee you anything, especially for a team that’s historically meddled in mediocrity.

Don’t tell this one fan that. A dude with the Twitter handle “R@msF@nSince76” is so confident in the Pro Bowl arm of Jared Goff that he went out and spent his hard-earned money on a Super Bowl 53 tattoo.

Check it out in all its regrettable glory below.

Here it is … Be sure to read the bottom line. Yes, I believe 100% in my team and am willing to prove it. pic.twitter.com/5ubVuZUKan

Now this man isn’t the first to do this and certainly won’t be the last. But if history repeats itself, he may have to head back to the parlor in February to have it removed.

Bruh it's too early. 💀 pic.twitter.com/yvuYCjT3Ds

Don’t respect this tattoo proclamation at all. It’s either a Super Bowl tattoo or go home for me. Don’t have one foot in and one foot out. pic.twitter.com/NS84B1usBU

Umm…I’m all for the #Eagles winning the Super Bowl and all, but this prediction is pretty bold…and if this tattoo is real? Also pretty INSANE pic.twitter.com/fdQTWOazIC

The price one pays for loyalty.