Louisville Basketball Is Getting Crushed For Using Duke, Kentucky Players To Promote Program 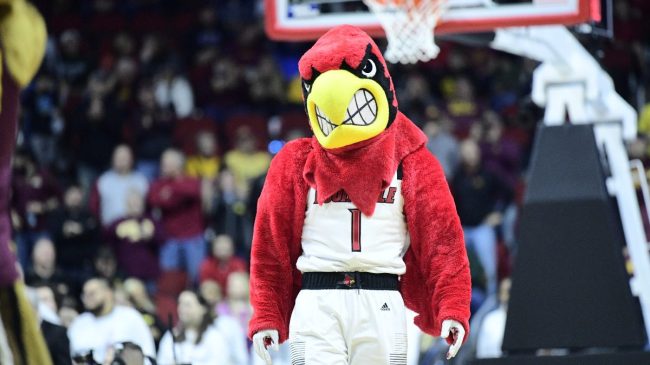 The Louisville basketball program did its best to promote its program to both recruits and supporters on Wednesday.

The Cardinals’ social media team flashed a graphic of its new coaching staff with head coach Kenny Payne leading the charge. Payne was hired back on March 18th, and this week, he filled out his supporting cast with the hirings of Josh Jamieson, Nolan Smith, and Danny Manning.

The staff seems like a solid one that’s been around some of college basketball’s great programs.

Payne, himself, was as assistant at Kentucky following an 11-year professional career.

Manning was a former star player at Kansas, going No. 1 overall in the 1988 NBA Draft. He won a national title with the Jayhawks before going on to be a head coach at both Tulsa and Wake Forest.

Smith was an assistant under Coach K at Duke while Jamieson was at Oregon prior to joining the staff at Louisville.

But when the Cardinals’ media team tried to use those past experiences as a way to promote its own program, it backfired quickly.

In an attempt to feature some of the NBA stars that the coaching staff has helped develop, the media team used a number of examples from rival schools Duke and Kentucky.

In the graphic are players like Julius Randle, Jason Tatum, Devin Booker, and Brandon Ingram.

Louisville basketball roots run deep, and seeing some of the program’s biggest archnemeses being used to as a promotion didn’t sit well with supporters.

They’re now being crushed online for the image.

All the respect in the world to Kenny. He’ll have Louisville back in the picture. But using Kansas, Duke, and Kentucky players up and down this graphic is… interesting lmao

This gotta be the biggest reach I’ve ever seen

Many fans wondered why the Cardinals didn’t use some of their own NBA alumni instead. Donovan Mitchell was just seen in the NBA Playoffs with the Utah Jazz.

You could have put Donovan Mitchell here at least, or Jae Crowder 😂

What makes no sense is Louisville has players in the NBA… Donovan Mitchell is a pretty good one.

No player on this graphic played for Louisville

It was a bold strategy to say the least. It doesn’t look like it’s paying off.