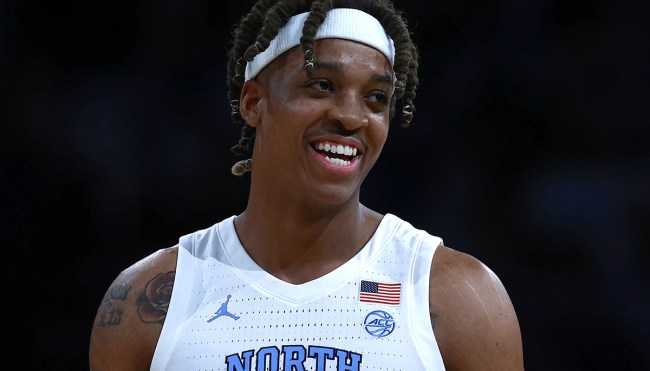 It’s been less than a year since the NCAA changed its long-standing policy prohibiting student-athletes from profiting off of their popularity, and it’s safe to say not everyone has been thrilled with the way the name, image, and likeness deals have impacted the landscape of college sports.

With that said, it’s kind of hard to hate on most of the people who’ve used the NIL shift to cash in; there’s certainly a conversation to be had concerning the massive amounts of money that have changed hands, but you can’t really blame players for taking advantage.

That’s especially true when it comes to those who’ve been able to capitalize on some awesome opportunities that would’ve previously caused a huge headache in the compliance department—like the one University of North Carolina basketball player Armando Bacot has been able to seize.

Bacot arguably played the biggest role in the Tarheels staging an improbable run during this year’s NCAA Tournament (one that unfortunately ended with UNC blowing a 15-point lead to Kansas in the national championship game), and while it seemed like there was a chance he may test the waters of the NBA draft, he ultimately decided to come back for his senior year.

However, it looks like there’s a chance he will be hitting the waters off of North Carolina on the Netflix series Outer Banks, as Bacot recently posted some shots of himself on the set along with a couple of actors during filming for the show’s third season.

Bacot will appear in a few episodes as a character named “Mando.” pic.twitter.com/4mkEPpr5TD

This man does it all 🐐 pic.twitter.com/jVhUrBqXyP

As of right now, it’s unclear what Bacot’s role as Mando will entail, but if the rest of Outer Banks is any indication, it’ll likely involve him dealing with some sort of precarious situation while shirtless on a boat.