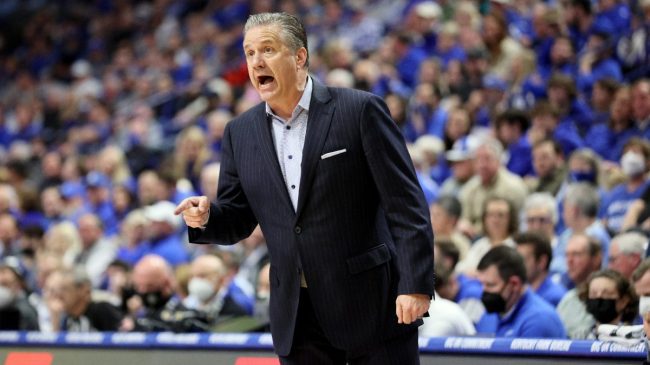 The NIL and transfer portal are changing the landscape of college sports as we know it.

The original idea of having player receive payment for their play on the field has now been met with criticism. Programs are now essentially buying players from either the college or high school ranks, luring players from away from other suitors with massive payment options.

We saw it with Jimbo Fisher and his top-ranked recruiting class at Texas A&M.

We’re now seeing it with USC allegedly setting up an NIL deal for Pitt WR Jordan Addison despite his not being on the transfer market.

While folks around college football have been quick to give their opinions on the changes sweeping through the sport, we’ve not heard as much from a basketball standpoint.

On Tuesday, Kentucky head coach John Calipari and his staff chimed in on the issues. Unfortunately, their stance didn’t really sit well with the Wildcat fanbase.

On NIL and Kentucky:

Our basketball program has and continues to be ahead of everyone else. I know. I have these conversations with recruits and other schools. We just don’t flaunt it on social media…BECAUSE WE DONT NEED TO. It’s Kentucky! The biggest stage FOR EVERYTHING!

Kentucky staffer TJ Beisner spoke on the NIL as it relates to Kentucky.

His message? Essentially it was, “We’re better than you, so we don’t need to do what everyone else is doing.”

He says that Kentucky basketball has and continues to be ahead of everyone else. The Wildcats just don’t have to flaunt everything on social media because, “it’s Kentucky!”

The long-winded rant continued for a few more posts, with Beisner echoing his original sentiment.

We target players and families who share that same vision. Some dont…and that’s fine. But we are confident.

“We will not guarantee money as an inducement. To anyone. Ever. Period. Because we don’t need to.”

That statement is funny considering reports surfaced yesterday of the Kentucky football program offering $800K to lure Jordan Addison away from Pitt, as well as Calipari’s shady recruiting past.

Once Beisner wrapped up his thoughts, he turned offered a glimpse into John Calipari’s opinion of the NIL process at Kentucky.

John Calipari weighs in on NIL

“I’ve pushed for NIL for 10yrs publicly and no one is more supportive, which is why our players are making more money than anyone, the right way.

If NCAA or federal govt make changes, we’ll adapt and continue to lead.”

Calipari states that he’s pushed for NIL publicly now for a decade, and that no one is more supportive. He, too, shared the arrogant “We’re Kentucky” view, which caused fans to lash out on social media.

The head coach says, “NIL won’t hurt us and hasn’t for any kid we’ve REALLY wanted.”

The Big Blue Nation immediately questioned why the program is consistently losing out on top players to programs like Duke if Calipari is, in fact, landing the targets he wants.

It’s not the first time that Coach Cal has been in hot water with the Wildcat fanbase. A number of supporters called for his job following a first round NCAA Tournament exit at the hands of 15-seed Saint Peter’s.

Now, the pitchforks are back out.

Losing to St. Peter’s, getting our ass kicked by Duke in, well, everything…Yep, it feels like we’re ahead of everyone else 🙄

The Kentucky brand no longer sells itself and we are seeing that. Losing every single top to Duke. No tournament wins since 2019. Continue the actions and the downward spiral will only continue.

I am surprised that this is the opinion of Kentucky Basketball

Will be interesting to see how the strategy plays out if top schools do guarantee https://t.co/2lmW9voWnU

Not a good take. UK is going to be left behind with NIL stuff. https://t.co/hDSkvR3sjA

Save this thread for when we become Indiana basketball.

Not the best look for Kentucky.

Yes, they are still one of the most recognizable brands in college basketball, but the arrogant views on this particular situation aren’t sitting well with the fans.