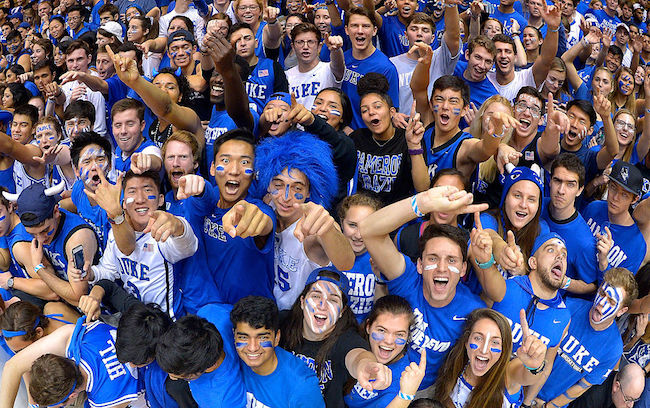 Earlier this week, the NCAA announced they were stripping the Louisville men’s basketball team of the national championship they won in 2013 thanks to a scandal involving stripping in addition to things you normally have to pay extra for. The team will be forced to vacate every win they earned between 2011 and 2015, so we’re all going to try and act really hard like they never happened until the NCAA uses all of the money they save by not paying athletes to develop a functional version of the giant neuralyzer from Men in Black to make everyone forget for real.

On Wednesday, the Cardinals headed to Durham to take on Duke and their army of rabid supporters known as the Cameron Crazies. College basketball is to undergrads in North Carolina what high school football is to the people of Texas, and it’s hard to top the sheer insanity of the most-dedicated Blue Devils fans, who put an incredible amount of effort into making opponents feel bad about themselves whenever they enter Cameron Indoor Stadium.

The Crazies are issued cheer sheets before each game tailormade to inflict as much emotional pain on their foes as possible, and they had no shortage of ammunition heading into the contest. According to The Spun, Mike Krzyzewski apparently asked students to go easy on Louisville, and while they respected his wishes to an extent, they still came prepared.

“Coach K has asked us to take it easy on them for the FBI scandal, and we respect the GOAT’s wishes.
That said, this is a photo of Rick Pitino w/ his tattoo OF THE 2013 NATIONAL CHAMPIONSHIP.”

Before the game, Louisville players headed over to the student section to get a look at the sheet for themselves, which featured an insult designed for virtually everyone on their team.

Based on their reactions, it appears they respect the artistry.

#Louisville guys came back over to inspect the Crazies’ sheet here at #Duke.
The guys are asked “How crazy is it that (Rick) Pitino got a tattoo of the 2013 National Championship?” as “SCANDAL SCHOOL” is chanted.
Dwayne Sutton being afraid of #UNC’s bench is funny to the Cards. pic.twitter.com/pMu5xWXUCm

The Cardinals added yet another to a long line of Ls after losing by 16.