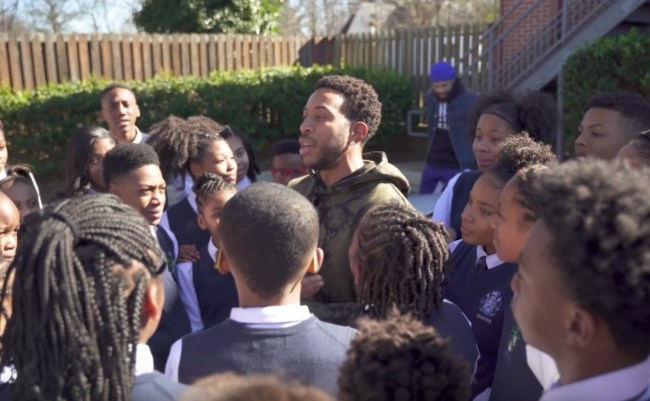 Being a rich celebrity has its perks. You live in mansions with movie theaters and shark tanks. You drive around town in the nicest sports cars on the planet. Any restaurant or club reservation you want is yours. And companies like Mercedes-Benz pay you huge sums of money to conduct random acts of kindness around your hometown.

Ludacris, real name Christopher Brian Bridges, was born in Illinois but he’s as embedded in the Atlanta rap scene as anyone out there. He moved to Atlanta at the age of 9, dropped his first rap album in 1999, and has had an incredibly successful acting career.

Fun fact: Ludacris is actually a distant cousin of the late great comedian Richard Pryor, arguably one the top-5 funniest stand-up comics to ever take the stage.

This clip has been making the rounds for the past few days and it shows Ludacris showing up at the Ron Clark Academy in Atlanta where he surprises two kids with tickets to the Super Bowl. The excitement here is infectious. According to WSB-TV, the Ron Clark Academy is a highly-acclaimed nonprofit school in ATL that’s received national acclaim for academic success. Here’s Ludacris making two kid’s dreams come true with Super Bowl tickets:

The average price of a Super Bowl ticket right now is $6,812 and the cheapest ticket available earlier this week was $3,589. The prices actually went down slightly after the NFC and AFC Championship games. There’s also expected to be slightly less demand for tickets this year because fanatic Eagles fans drove up the prices last year.

I’ve been meaning to hit up Ludacris’ restaurant at the Atlanta airport for a while, Chicken + Beer, has anyone been and enjoyed it? It opened a few years ago, in 2016, and the menu is pretty much full of all the things I want to eat and drink on a regular basis (fried chicken and beer).

The Super Bowl is the biggest event of the year for brands with NFL sponsorships and it’s not even close. The cost of these two tickets was barely a blip on the radar for a brand like Mercedes-Benz but it’s a gesture that those two kids will remember for a lifetime.