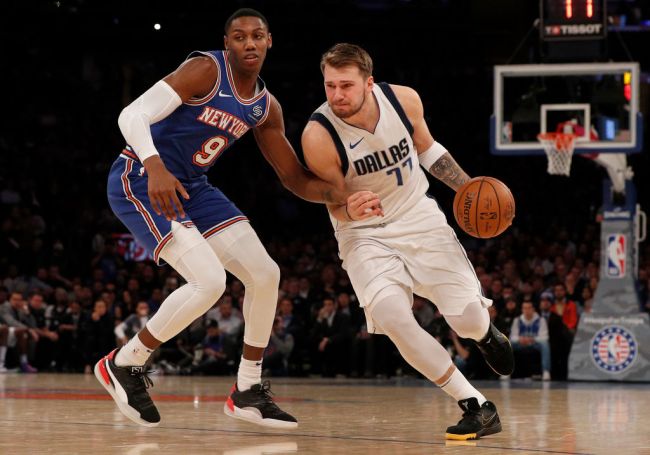 Rumor has it that things between Luka Doncic and the Mavericks aren’t exactly perfect and with Dallas parting ways with General Manager Donnie Nelson, Jay Williams decided that this would be the perfect time to start the Luka to the Knicks chatter.

“Earlier in the year I said New York could be a potential opportunity [for Luka] and people killed me for it. It’s feasible,” Williams explained on his “Keyshawn, JWill & Zubin” show Thursday morning.

“There are feasible scenarios, where you start looking at, where will Luka want to go and build if it doesn’t work out in Dallas,” Williams continued, noting that “New York isn’t the only option.

Williams isn’t saying a whole lot there, it’s basically just speculation, but his comments gained a bit more legitimacy later in the day. On Thursday afternoon it was reported that Doncic was upset with the firing of Nelson. Doncic was quoted saying that his firing was “kind of tough,” but that he’s “not the one making decisions there.”

There were reports earlier in the week that Doncic had alleged beef with Bob Voulgaris, the sports bettor-turned-Director of Quantitative Research and Development who he apparently does not see eye to eye with.

Owner Mar Cuban shut down that rumor on Twitter with a two-word response.

On top of all that, Rick Carlisle announced that he wouldn’t be returning as the Mavs’ head coach next season.

Maybe all of this is nothing, or maybe it turns out to be something, but as long as there are rumors of Doncic being unhappy then you better believe that his name is going to be linked to the Knicks.