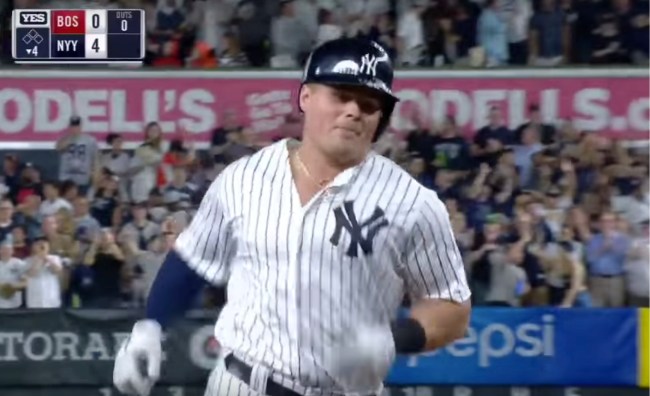 Luke Voit of the New York Yankees isn’t exactly thought of as the Hulk of the team’s lineup. Sure, the dude is a beast and blasted 15 homers last year while splitting time with the Yanks and St. Louis Cardinals, but when people think about the real titans of this year’s Evil Empire in MLB, they tend to think of Giancarlo Stanton and Aaron Judge, not Voit.

While that’s most definitely true, Luke Voit showed yesterday that he’s a F’in man, not only blasting a three-run bomb to dead center in the first inning to give the Yankees an early lead on Opening Day, but then, in his next at-bat, taking a fastball on the elbow and brushing it off as if it were nothing more than a little scratch. And when Voit got hit by that pitch, oh, did it look gnarly.

Thanks to Getty Images photographer Sarah Stier, fans are able to see exactly what it’s like to get nailed by a mid-90s fastball to your elbow. See below of how Luke Voit’s looked.

This is what a hit by pitch looks like up close 😳 pic.twitter.com/rhRS8TeYUW

Yikes, that sh*t looks like it really did legitimately leave a mark. And how tough is Luke Voit? When asked about the beaning after the game, he simply said, “It’s all good, brush it off. No worries, good to go.” Such a badass.

Naturally, once the above images made their rounds on the Internet, plenty of people had reactions. Here’s a look at what some were saying on Twitter after the wild pics.

Baseball was recovered after it pic.twitter.com/sufmn3KLt3

Better check that baseball for dents

His tricep is an elbow guard

You’re just mad because you can’t do this. pic.twitter.com/0w7GLRUSXv

That’s how you take a pitch like a man

Remember getting hit by a pitch in little league and thinking that hurt like hell? Now add over twice the speed to that slow-ass toss and have it nail you right on the elbow, then brush it off like it didn’t hurt at all. Luke Voit, you’re a MFing hoss, because most of us would be crying to our parents asking for a Capri Sun to help the pain go away — uh, not that that ever happened to me or anything.