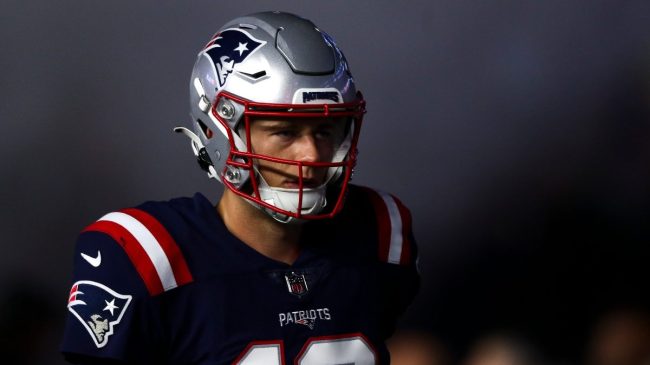 The New England Patriots quarterbacks have been a hot topic of discussion recently. Especially after Bill Belichick benched Mac Jones after just three drives. However, Jones is facing some criticism, as multiple videos of a “dirty slide” has everyone comparing him to NBA star Grayson Allen.

Dov Kleiman shows a clip of both slides Jones took in the game against the Chicago Bears. One is much more clear than the other, as it appears the Patriots quarterback kicks Jaquon Brisker in the nuts. However, in the other clip, you can see Mac Jones kick his leg out at Brisker during a completely different play.

When Mac Jones kicked #Bears @JaquanBrisker on Monday Night, there were questions if Mac purposely raised his leg up in order to make contact with the defender.

Based on this video of another slide, it could appear that he is trying to hit defenders.pic.twitter.com/dfKEuXCcRV

Is it dirty? Or is Jones simply trying to protect himself? Most believe Mac Jones is legitimately playing a dirty game. Especially after Nick Wright conveniently reminded everyone of the Patriots quarterback appearing to gator-roll Brian Burns’ leg from last season.

Everyone (justifiably) mad at Mac Jones for that kick to the crotch, but don’t forget him gator rolling Brian Burns last year.

Guy plays QUARTERBACK and has had multiple obvious dirty plays in less than a year. pic.twitter.com/mK0X9QBwQj

So, it appears we have three dirty plays within a year (two of which are in the same game). For that reason, it has everyone comparing Mac Jones to NBA star Grayson Allen. Of course, Allen has a history of making dirty plays. He has way too many videos of doing so.

Grayson Allen of the NFL

I mean, someone even made an entire “highlight” reel of Grayson Allen playing dirty throughout his college career.

Grayson Allen: Why is everyone calling me a dirty player I’m not.
Receipts:
pic.twitter.com/sSbYRjAupq

At the end of the day, Mac Jones’ actions do appear to be dirty. However, it’s not 100% clear if it was intentional or not. Maybe he’ll address the situation down the road, but for now, many are left to speculate about the Patriots quarterback.