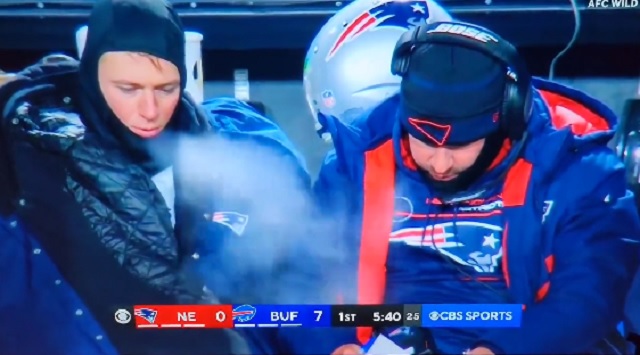 It’s going to take Mac Jones a while before he gets used to playing in the cold weather games.

The Florida native, who played college football in Alabama before being drafted by the Patriots, played in the coldest game of his career in Saturday’s Bills-Patriots game in Buffalo.

During the game, Jones was seen being fascinated by his own breath in the cold while sitting on the sidelines.

Mac Jones trying to listen to Josh McDaniels, but too fascinated looking at his own breath: pic.twitter.com/pwZUFxz6sV

Fans thought the image of Jones checking out his own breath in the cold pretty funny.

he definitely wanted to see how far he could get it to go https://t.co/0i4LEhyhd2

look if you grew up in a warm place this is just how it goes when you’re outside in the big cold for the rest of your life. I still do it https://t.co/tpO5BVdSGf