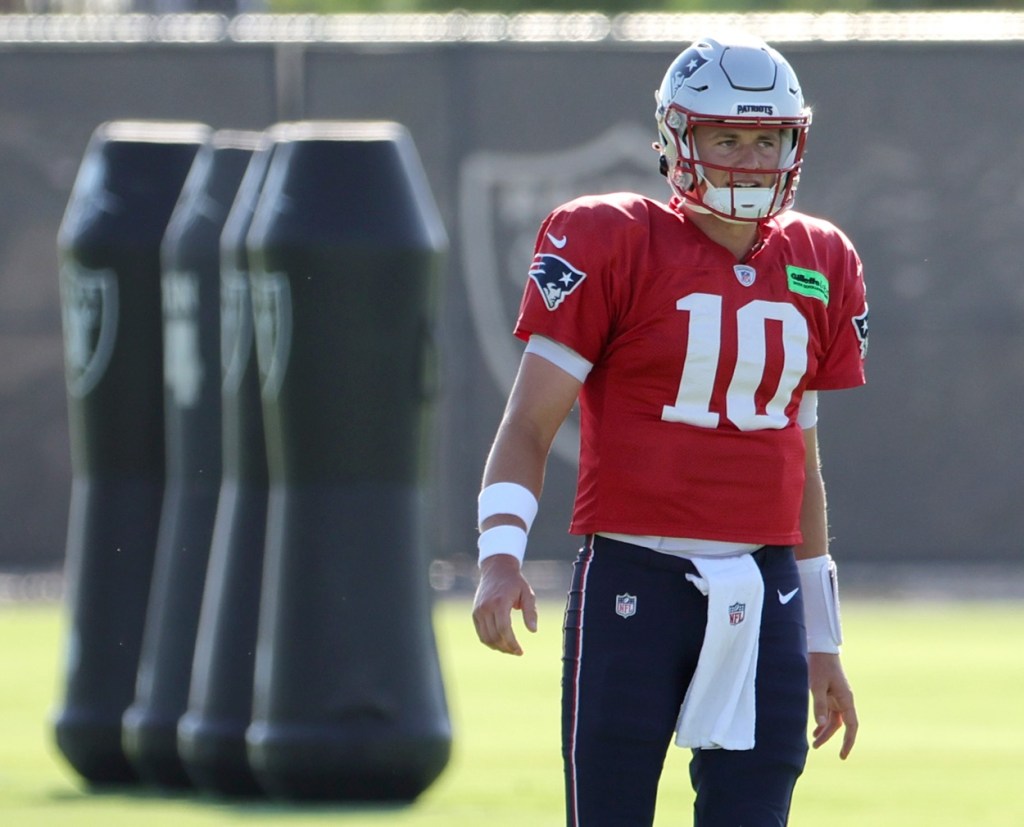 Since the earliest days of preseason camp, there have been concerns about the New England Patriots’ offense. Bill Belichick was visibly annoyed and recently shut down a reporter amid reports that Mac Jones and the Pats’ offense ‘looks broken.’

Mac Jones himself has admitted there’s trouble in paradise with some revealing post-practice comments, but vowed to ‘do the right thing on game day.’ The leadership shown by the sophomore quarterback helped assuage some concerns over the Patriots’ offensive woes but not for long.

Reports coming out of Tuesday’s practice suggest the Patriots offense, and particularly Mac Jones, looked worse than it has so far. Today was a joint team practice between the Raiders and Patriots which means it was a good chance for the offense to get in some meaningful reps. But according to Boston Herald beat reporter Andrew Callahan, Mac Jones and the rest of the offense stunk it up.

Mac Jones Puts In His Worst Practice Yet

‘Most troublesome offensive practice of Summer’ isn’t what you want to hear as preseason camp is winding down.

Man, this is bad. The most troublesome offensive practice of summer.

I’m not getting the impression that Mac Jones would be up to full speed with another week of practice under his belt.

The #Raiders have been practicing for a week longer than the #Patriots, and it shows everywhere so far: 1-on-1s, 7-on-7s and a brief 11-on-11 period.

Mac is 5/9 with a sack halfway through practice, and the starting offense has allowed 2 run stuffs on 3 rushes.

Things did slightly improve towards the end.

It doesn’t take a degree in rocket science to see that Patriots fans seem worried by Mac Jones’ performance so far.

Last I heard the Patriots weren’t even going to have an Offensive Coordinator this season. That doesn’t seem great for continuity and the chain of command.

It's almost as if putting Joe Judge and Matt Patricia in charge of your offense wasnt a good idea or something….

That’s right. It’s preseason. And all of the troubles magically disappear on Day 1 of the regular season.

Man, this is preseason.

Oh, boy. Their practice record is looking so shaky. They’ll never win the preseason practice Super Bowl at this rate.

Bill Belichick is a football genius. He’s arguably the greatest NFL coach in history. If he thinks it’s in the team’s best interest to not name Offensive and Defensive Coordinators then I don’t doubt for a second that’s what is best for the Patriots in their current situation.

However, I’m pretty certain Bill would love it if the organization was in a place where he could name both an OC and DC and things would be operating normally… It remains to be seen how this will all work out for Mac Jones and the Patriots. But things aren’t looking so good after today.