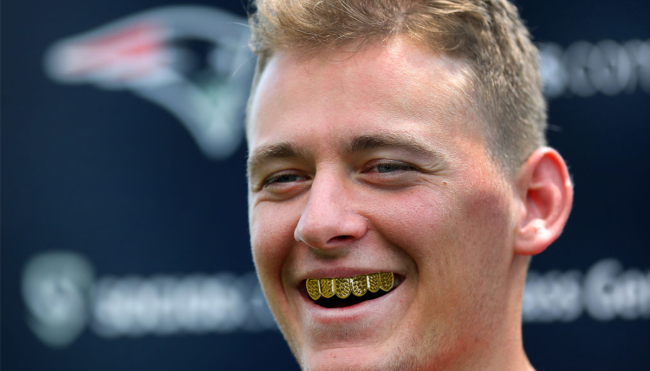 On Tuesday, the New England Patriots sent shockwaves throughout the NFL when the team announced the release of Cam Newton, a roster move that officially made Mac Jones the victor of the quarterback battle that served as one of the hottest topics of discussion over the course of the summer.

Based on early reports, there were a number of factors that led to Newton being shown the door after a single season in a Patriots uniform—including the vaccine skepticism that opened the door for the QB who ultimately secured the job he was vying for.

Of course, Jones also did plenty to help his case. The rookie put up some incredibly solid stats during the snaps he took during the preseason and managed to impress Bill Belichick with the work ethic that allowed him to quickly learn the system the franchise is obviously hoping he’ll be at the center of for the foreseeable future now that the torch has been passed.

We’ll obviously have to wait and see if the Patriots have found a worthy successor to Tom Brady in the form of the Alabama product, but I personally feel like there is one major red flag that isn’t getting enough attention when it comes to properly evaluating Jones’ decision-making abilities: his nickname of choice.

On September 5, 1998, Gordon and Holly Jones welcomed their third child into the world at a Jacksonville hospital; a baby boy whose birth certificate officially reads “Michael McCorkle Jones.” As you know by now, the future NFL quarterback would eventually adopt the “Mac” moniker that he derived from his middle name, but an astute observer would realize that by doing so, he willingly passed on an incredible opportunity: the chance to be known as “Mike Jones.”

Now, I can understand why Jones declined to embrace his birth name, as being known as “Mac Jones” means he didn’t have to risk living in the shadow of the Houston rap legend and eliminated the possibility he’ll be hounded by “Who?” jokes for the rest of his life if he ends up flaming out in the NFL.

With that said, we’ve also been deprived of the opportunity to live in the world where the starting quarterback for the New England Patriots is a guy named “Mike Jones” who looks less like someone who should be playing in the NFL and more like a dude who makes a living by pumping out monetized videos where he breaks down YouTube drama while sitting in a gaming chair; the meme potential would’ve been off the charts.

Now, feel free to call me an idiot for suggesting this seemingly minor life decision could be indicative of the choices Jones makes on the field, but if things don’t work out as planned, don’t say I didn’t try to warn you.