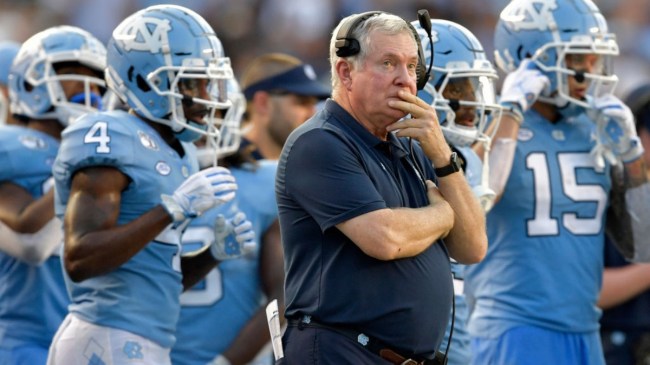 North Carolina had an opportunity today to get a win over a blue blood football program and extend their undefeated start to the season.

The Tar Heels were favored over Notre Dame heading into today’s matchup after the Fighting Irish had struggled through their past 2 games.

Notre Dame didn’t struggle today. North Carolina scored a touchdown on the game’s opening drive in Chapel Hill and that was about the end of them having any success in the game.

Their struggles reached their peak early in the second half. They allowed Notre Dame to march down the field on the first drive of the half and score a touchdown to extend their lead to 31-14.

On the first play of North Carolina’s ensuing possession, Drake Maye was strip-sacked giving Notre Dame the ball right back at the UNC 15-yard line. It was a brutal start to the half, but the Tar Heel defense responded.

They held Notre Dame at the goal line and seemingly forced a turnover on downs. Unfortunately for North Carolina, the refs saw things differently. They threw a flag on a 4th and goal incompletion on a non-existent pass interference.

With his team struggling, Mack Brown was not going to stand for this call wasting his defense’s best effort since early in the 1st quarter. He absolutely lost it on the refs, drawing an unsportsmanlike conduct penalty that moved ND to the 1.

Mack Brown was not happy after the call: pic.twitter.com/PLihIAad8f

Notre Dame ended up punching it in on the next play.

The call didn’t end up having much of an impact on the outcome of the game as Notre Dame continued to dominate the rest of the way, but at the time, it seemed to take away any hope North Carolina would have of a comeback.

The game remaining a blowout likely won’t help Mack Brown feel any better about this call.