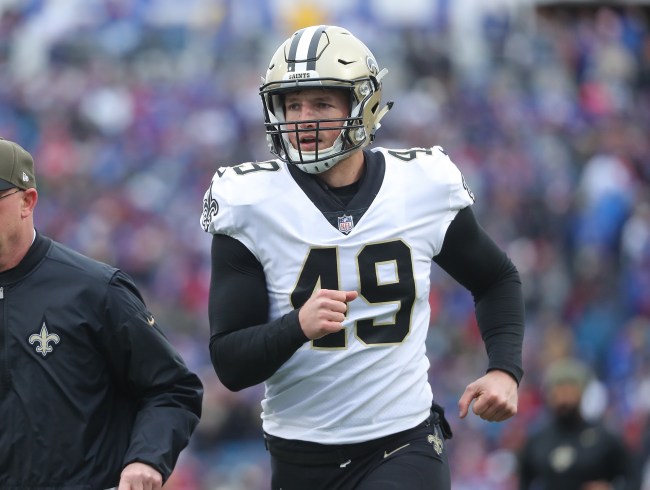 Madden NFL 20 has officially hit shelves, and, while lots of football-obsessed gamers probably wasted tons of hours all weekend long trying to win a digital Super Bowl, the game has already proven to have some haters. From hilarious glitches to real-life players being pissed off about their overall ratings, Madden NFL 20 will never be able to get things exactly right.

While the game does its best to try and duplicate hard-hitting NFL action, there are a lot of times when it just totally misses. Look, I’m not saying I can do any better — I mean, there are thousands of players to evaluate and rate and try to duplicate their likeness and, well, you get the point, developing Madden NFL 20 is a tough job. But one person who doesn’t seem too happy with how things went down for his persona in the popular game is New Orleans Saints long-snapper Zach Wood; who’s the lowest-rated player in the game.

Rated a pathetic 36 overall — tied with Raiders long-snapper Trent Sieg as the worst in Madden this year — Wood made sure he delivered a reaction to Madden NFL 20, delivering an A+ message on Twitter to prove that he’s not as bad as the talent evaluators seem to think he is. Take a look at the video from Wood below, which already got a reaction from the Madden Twitter account.

For those with bad eyes, that’s Zach Wood knocking out a copy of Madden NFL 20 from fellow long-snapper Nick Moore’s hand on the first attempt, proving that, yeah, he’s got this whole football thing down just fine. When asked about the video, here’s what Wood had to say, per ESPN.

“The pressure was on. I’m not used to being on camera,” Wood said Saturday. “I was worried. … If I miss this thing five or six times in a row, they’re gonna be like, ‘You deserved that 36 Madden rating.'”

While Wood may have felt the pressure, it seems like the video worked wonders for his Madden rating, because, apparently, he found out from a rep for the game that his rating would get a boost.

A Madden representative emailed the Saints to let them know that Wood’s rating would get a boost. Wood acknowledged being surprised by the low rating, considering how successful the Saints’ kicking operation has been the past two years with the elite punter-kicker combo of Thomas Morstead and Wil Lutz.

“I was like, ‘Whoa, what’s going on? Am I not doing a good job?'” Wood said. “But I think we work really well together, and having Tom and Wil there to help make me right has helped me look a little bit better, too.”

Given the fact Madden NFL 20 rated Wood so low, he admitted that his buddies couldn’t help but live down the fact that he’s just a 36 overall. Like, seriously, how is that even possible?

Wood said he “absolutely” has been teased about his rating — especially by friends — but noted it’s part of his personality to have fun with it. He is actually listed as a tight end by Madden — like many other long-snappers who also bring up the rear in the game’s ratings.

Asked if he has ever used himself as a tight end while playing the game, Wood said he didn’t know if he could.

“I don’t even play Madden. I have no idea,” Wood said. “But I wouldn’t because I’m a 36. You’re not winning much games with that.”

Considering he’s looked at as the worst player in Madden NFL 20, something tells me that Zach Wood won’t be firing up a console to play the game anytime soon. Put a little respect on this man’s name.