Magic Johnson Thinks Stephen A. Smith Is To Blame For The New York Knicks Not Making The Playoffs, But His Reasoning Is Wrong 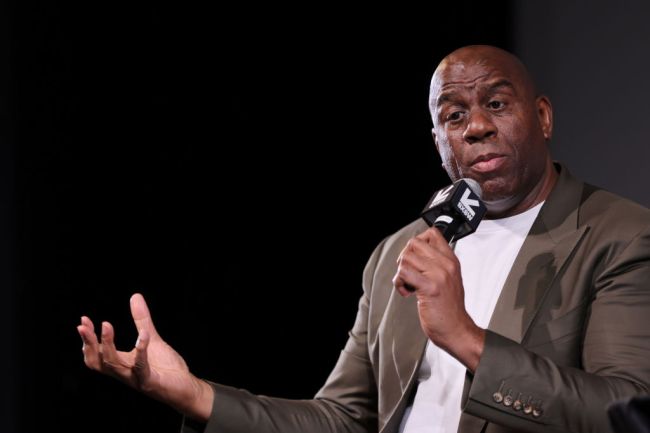 The New York Knicks were a mess this season. They had a big signing get benched early in the season. They underperformed throughout the year to miss the playoffs. Now one of their stars wants a trade.

The season has been one to forget for the Bockers. Now one of their most prominent fans is being blamed for the poor season.

Today, Magic Johnson appeared on a couple of ESPN shows and blamed Stephen A. Smith for the Knicks missing the playoffs. He claims that Stephen A didn’t want the Knicks to sign Lonzo Ball and if they had, they would have made the playoffs this year.

.@MagicJohnson says @stephenasmith is part of the reason why the Knicks ended up out of the playoffs 😂👀 pic.twitter.com/qGXnPiZxTf

The most glaring issue with this argument is that Lonzo Ball barely played this season. He only suited up for 35 games this year for the Bulls. If he had played for the Knicks, he’d have had to make a massive impact in those 35 games.

Based on their current win percentage, the Knicks would be expected to go 15.5-19.5 in a 35 game sample. As of right now, Lonzo would have had to get that to 21-14 in his 35 games just for the Knicks to be tied for the last play-in spot. That’s a win percentage of 60%, which would be better than all but 4 teams in the East.

It also assumes some kind of innate chemistry between Lonzo and Julius Randle that was going to lift the Knicks to the playoffs. However, the two of them never won more than 37 games in a season together. They also played together when Julius Randle was a very different player.

During his time with the Lakers, Randle shot less than a single 3 per game every season and never shot higher than 27.8%. He began developing his 3-point game in his season with the Pelicans, shooting 2.7 3s per game at a 34.4% rate, but it is a massive part of his game with the Knicks. 3s now account for more than a quarter of his shot attempts.

Lonzo has also altered his game to play outside the arc more since the last time they played together. These changes in their play styles would have made it more difficult to immediately gel than Magic seems to believe.

While Lonzo would have to have been an upgrade over what the Knicks got from Kemba Walker this season, it’s just difficult to see acquiring him being enough to catapult them to playoffs.