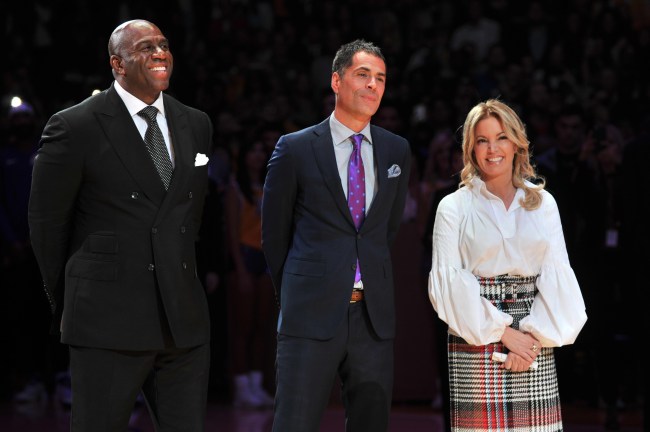 Magic Johnson may have surprisingly resigned from his post as the President of Basketball Operations for the Los Angeles Lakers a couple months ago — and then threw his former colleague, Rob Pelinka, under the bus — but it sure seems as if both sides have no lingering ill will towards one another. Why? Because, according to Johnson himself, he was helping team executives during the entire Anthony Davis trade negotiations this past weekend.

Speaking with Broderick Turner of the Los Angeles Times about his thoughts on the Davis trade, Magic Johnson delivered the surprising news that he was, in a way, taking part, admitting he was “sending notes” to encourage the Lakers’ decision makers to pull off the deal. Here’s what Johnson had to say to Turner.

Johnson said he texted Buss, Pelinka and Kurt Rambis, the Lakers’ special advisor, last week and implored them to get the Davis deal done.

“Listen, all that stuff is past us. I have prayed on that and moved past being mad or upset. I want us to win, so that’s why I was sending notes. I wanted us to make this trade because I knew this was a great trade for both teams. The Pelicans got three young talented guys and they got a great pick at No. 4 and two other first-round picks so it was a great trade for them too.”

Now, if this were just Magic Johnson the former Lakers great doing this, OK, no big deal. But it’s kind of strange that Johnson and his former colleagues still have such tight communication given Magic Johnson blindsided everyone in the franchise by leaving his position without telling anyone before doing so; including owner Jeanie Buss.

The Lakers have been dysfunctional AF ever since they landed LeBron James in free agency last summer, and, while they pulled off the big trade in acquiring another superstar in Anthony Davis, we’ll have to wait and see if any other big moves will follow. According to reports, the team isn’t believed to be a popular destination for other A-list free agents, and, after hearing that Magic Johnson could still be influencing team decisions without actually being an employee, it’s not much of a surprise to hear other stars don’t want anything to do with the iconic franchise.