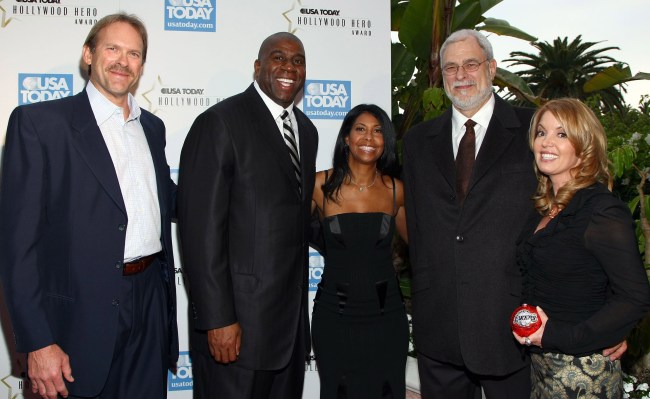 After abruptly quitting his job as President of Basketball Operations for the Los Angeles Lakers, Magic Johnson been all over the news trying defuse allegations about why he quit and dropping his own allegations about the organization he left.

After saying that he couldn’t give Lakers owner Jeannie Buss a heads-up about his resignation before it happened because she’s his “sister” and how much he “loves” her, Johnson went on ESPN’s First Take on Monday and took a blowtorch to the team’s front office and in particular, GM Rob Pelinka.

“My concern is over my relationship with my sister, Jeanie Buss.”

Pelinka later responded to Magic’s claims by saying that the allegations made against him are “simply not true.”

Another person in the Lakers organization who was reportedly dumbfounded by Johnson’s comments on First Take is, once again, Magic’s “sister” Jeanie Buss.

According to a column by ESPN’s Ramona Shelburne, published just hours after Magic’s claims, Buss spoke with Johnson several times following his public resignation, asking him if there were any issues with Pelinka or anyone else in the organization, and he told her nothing.

Which is why Buss was once again blindsided when Magic went on First Take and complained about her, Pelinka and Lakers business operations president Tim Harris.

All he told her was “he didn’t feel like he could be Magic in this role and wanted his freedom back.”

However, should Buss and the wealthy minority owners of the Lakers (who are also reportedly not happy) ever want to sell the team, Magic ways he would be first in line to try and snap the team up.

“If the Lakers were up for sale tomorrow, yes, I’d be running up to Jeanie and say, ‘Let me buy them.’ Listen, it’s a gold mine. The Lakers are a gold mine,” Johnson told Max Kellerman.

What a dumpster fire.