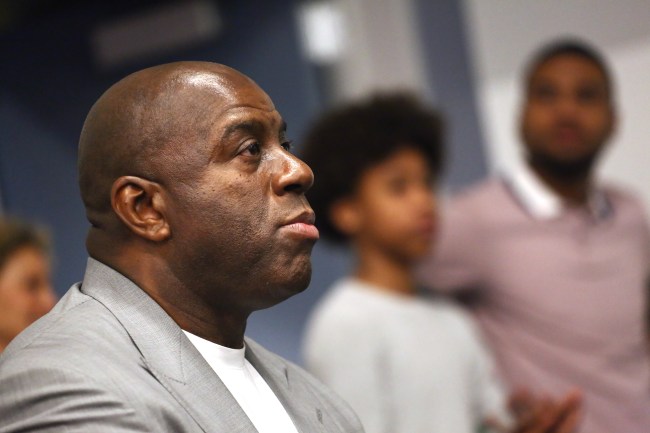 Early this morning former Lakers President Of Basketball Operations made a visit to the set of First Take and dished out all the Lakers secrets.

Not only did Johnson call out Rob Pelinka as the person who “backstabbed” him.

.@magicjohnson explains in full the reason why he stepped down as the Lakers president. pic.twitter.com/oats954tDP

"If you're going to talk betrayal, it's only with Rob [Pelinka]."

—@magicjohnson on the Lakers pic.twitter.com/K0sSLK2rhB

But Johnson also revealed that he was planning to target Kawhi Leonard and Kyrie Irving while also revealing a tidbit about how Kevin Durant was likely headed to the Knicks.

So according to Magic, the two big free agents the Lakers will likely target are Kawhi Leonard and Kyrie Irving. He’s not convinced Kawhi to the Clippers is a foregone conclusion.

Magic Johnson was going to target Kawhi Leonard and Kyrie Irving for the one max slot the Lakers had this summer. The feeling is Kevin Durant is going to New York or staying in Golden State. LeBron James was (and likely still is) going to be apart of the recruiting meeting.

Johnson still believes that despite the dysfunction in Laker Land that LeBron James wILL still bring a championship to L.A.

–@MagicJohnson says @KingJames will win a title with the Lakers. (via @FirstTake) pic.twitter.com/Zv50zEjHOm

I highly doubt the Lakers will get any top free agent now considering how much a mess they are.