Magic Johnson Responded To Critical ESPN Report By Going On ESPN And Bashing It With Help From Stephen A. Smith 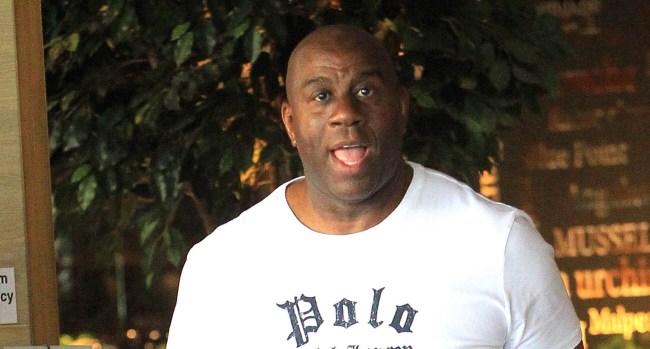 Shortly after Magic Johnson’s sudden and unexpected resignation as President of Basketball Operations for the Los Angeles Lakers, speculation began that a yet-to-be published ESPN report was possibly part of the reason he stepped down.

As word spread through the Lakers’ organization and the NBA, several people wondered whether Johnson’s departure was related to a yet-to-be-published article by ESPN that is said to address allegations about Johnson’s conduct with employees.

“That story is wrong,” Johnson told the Los Angeles Times.

He later added to a group of reporters: “Never disrespected anybody. Never did anything bad. Am I tough? Hell, yeah! You work for me, I’m demanding. But at the same time I’m fair. They’ve been talking about that article for how many months? Everybody running, ‘Oh they’re writing an article.’ I’m gonna say, why didn’t they interview anybody at ESPN? If I was doing something wrong to employees disrespecting, this or that, think they would’ve hired me twice?”

This week, that very ESPN report was published and it did indeed paint Johnson in a very negative light with regard to how he allegedly treated members of the Lakers front office staff.

“If you questioned him on anything, his response was always a threatening tone,” said a Lakers front office staffer who interacted with Johnson directly. “He used intimidation and bullying as a way of showing authority.”

…As one ex-Lakers star privately told confidants, “It’s f—-ng crazy over there.”

…”He comes off to the fan base with the big love and the smile,” said one ex-Lakers athletic training official who interacted directly with Johnson. “But he’s not — he’s a fear monger.”

Tuesday evening, Magic went on SportsCenter on ESPN to refute the allegations.

What’s interesting about Johnson’s appearance, which was supposed to be part of an “NBA Finals Preview,” is that Stephen A. Smith and Michael Wilbon wholeheartedly supported Magic’s efforts to discredit the story, published by the very organization they work for, without forcing him to provide any actual evidence to prove what was written is untrue other than “because he says so.”

Magic Johnson's response to the reports that came out this morning: pic.twitter.com/YyzfuE2xE0

Of course, this shouldn’t come as much of a surprise, especially considering the way Smith tried to rip apart the report by ESPN senior writer Baxter Holmes earlier in the day on First Take.

Yes, @KobeBryant was LIVID his name was even mentioned amid all of this Lakers mess! pic.twitter.com/qpJI8BdR0Q

What exactly was the point of Smith’s rant? That’s a question asked by many, including New York Times NBA writer Sopan Deb.

This is Stephen A. openly doing PR on behalf of the Lakers, Kobe and Rich Paul, while at the same time undermining his own network's reporting. It's the strangest thing. Kobe says "Keep my name out of your mouth"? Why is Smith just…repeating that?https://t.co/GoIeIDUPn7

It does make one wonder why ESPN would even bother publishing the report, based on interviews with “nearly two dozen current and former team staffers, ranging from occupants of executive suites to office cubicles, in addition to league sources and others close to the team,” if they were just planning on letting Smith go on their network and attempt to repeatedly tear it apart.

Here’s a full transcript of what Johnson had to say…

This was Magic Johnson's full response to the ESPN story from this morninghttps://t.co/vYLmUh3D2u pic.twitter.com/HKZMlBySuw