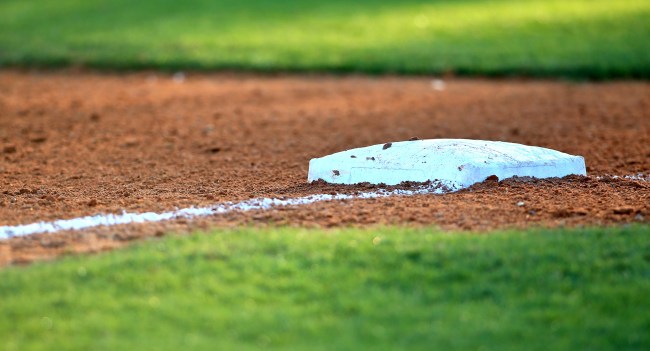 Major League Baseball has long been looking for new ways to stimulate interest. From trying to shorten the games to (allegedly) juicing the baseballs, the powers-that-be in MLB continue to tweak away at our National Pastime.

Over this past winter, Major League Baseball announced several significant new rule changes that they hope will facilitate bringing in and keeping fans.

From pitchers being required to face a minimum number of batters in a game to commercial breaks during innings being shortened by 20 seconds, MLB is just full of new ideas.

One of those new ideas which was revealed on Wednesday is allowing batters in the Atlantic League to steal first base in the second half of this season.

Yes, you read that right. Batters can STEAL first base.

In the second half of the season, the league will allow batters to steal first base: Any pitch on any count not caught in flight will be considered a live ball, and a batter may run to first base, similar to a dropped third strike.

That’s not the only rule MLB will be experimenting with in the Atlantic League in the second half. They will also be installing “robot umpires” to call balls and strikes.

The independent Atlantic League became the first American professional baseball league to let a computer call balls and strikes Wednesday night at its All-Star Game. Plate umpire Brian deBrauwere wore an earpiece connected to an iPhone in his pocket and relayed the call upon receiving it from a TrackMan computer system that uses Doppler radar.

He crouched in his normal position behind the catcher and signaled balls and strikes.

“Until we can trust this system 100 percent, I still have to go back there with the intention of getting a pitch correct because if the system fails, it doesn’t pick a pitch up or if it registers a pitch that’s a foot-and-a-half off the plate as a strike, I have to be prepared to correct that,” deBrauwere said before the game.

Umpires, at least for now, will still have the some ability to overrule the computer and will also have to weigh-in on checked swings.

As for when this new technology will make to the big leagues, MLB Commissioner Rob Manfred said, “We need to see how it works, first in the Atlantic League and then probably other places, meaning other parts of minor league baseball, before it comes to Major League Baseball,” Manfred said. “Kind of gets back to the question that I was asked earlier about the baseball, we hear all the time from players, why don’t we have an electronic strike zone, why don’t we have an electronic strike zone? We try to be responsive to those sorts of expressions of concern. We have spent a lot of time and money on the technology. It’s not just to address player concerns. It obviously has broadcasting uses. That same technology can be used in our broadcast, which has value to our fans. But we feel it’s incumbent upon us — people that play the game raised this as something that could make the game better. We kind of feel it’s incumbent on us to figure out whether we could make it work. And that’s what we’re doing.”

For many fans, this new tech can’t be used soon enough.

As for stealing first base? The jury is definitely still out on that one.