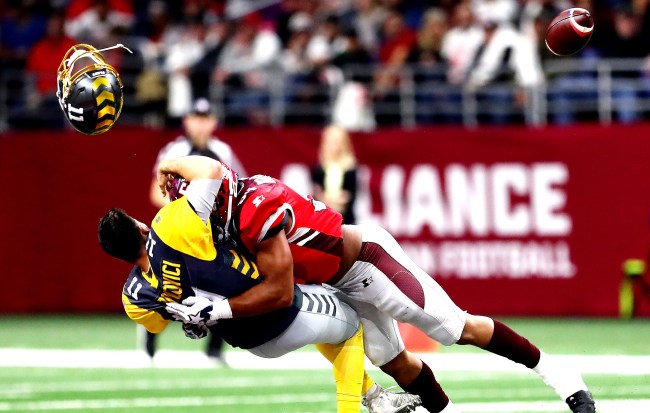 You may have noticed only a handful of those football leagues are actually still functioning. (Remember the United Football League? Jay Gruden, Jim Fassel, Kurt Schottenheimer, and Jerry Glanville were coaches in it.)

Not that all of these previous failed football leagues is dissuading the people in charge of Major League Football, which, as I mentioned, is actually a thing that is happening.

In fact, Major League Football just picked up the Alliance of American Football’s gear at a yard sale or wherever it is they sold it to help get ready for the league’s spring 2020 launch.

But wait… isn’t XFL 2.0 also going to be launching in the spring of 2020? Yes. Yes they are. We are going to be up to our eyeballs in spring football if the Spring League comes back for another season.

Major League Football, which had planned to launch in 2016 but pulled the plug, now plans to get started in 2020. The league has acquired gear previously owned by the AAF, purchasing “[v]irtually all of the football equipment, video equipment, and medical supplies necessary for eight teams.”

MLFB plans to launch with six teams, with a season opening not long after the next draft.

“The AAF provided proof of concept for a spring league with attendance, viewership, and the successful transition by some players to the National Football League,” MLFB president and CEO Frank Murtha said in a press release. “By opening the season in early May, the league will give players an opportunity to get additional practice, to gather film, and show the NFL scouts and coaches why they deserve to play on the NFL level. MLFB will provide the NFL with another source of valuable players.”

Murtha added that the league saved nearly $2 million by buying up the AAF’s old gear (the AAF people really need the money) and said the purchase is a great example of the league’s “responsible mindset.”

“We are committed to long-term financial sustainability,” said Murtha.

Yeah… good luck with that.