Malik Willis Is The Smartest Man Alive After Hilariously Giving Up In Drill Vs. Jeffery Simmons 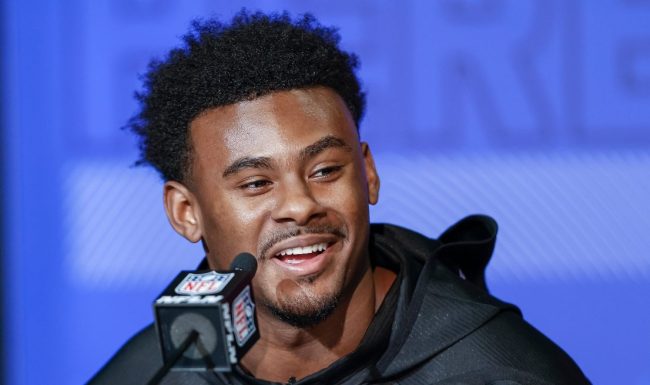 The Tennessee Titans are in the middle of training camp as the team prepares for the 2022 NFL season. During the draft, the front office selected Malik Willis in the third round and he’s now a potential key piece for the franchise’s future. However, the rookie quarterback was seen hilariously giving up in a drill against Jeffery Simmons on Tuesday.

In a video shared by Paul Kuharsky, the Titans had Malik Willis and Jeffery Simmons lined up to run a drill. The idea was for Willis to do everything possible to get past Simmons. However, he smartly falls down and gives up instead. Tennessee’s star defensive tackle is a behemoth of a human being. He’s the closest thing to Aaron Donald in the NFL who is an absolute monster as well.

It appears Simmons couldn’t help but laugh as Malik Willis essentially curled up into a ball on the field. It’s nice to see the Titans players enjoy themselves in training camp. This team is primed for another playoff run as the roster looks solid for the upcoming season. As for Willis, he’s not likely to see the field much in his rookie year unless something drastic happens.

He’s in an ideal situation to begin his career though. The Titans have been one of the best teams in the league since Mike Vrabel took over as head coach. Additionally, Willis has little to no pressure of taking over as the starting quarterback after being taken in the third round of the NFL Draft. So, he has the privilege to take his time, learn, and develop. Who knows, maybe this time next year Malik Willis will be more willing to face off against Jeffery Simmons.