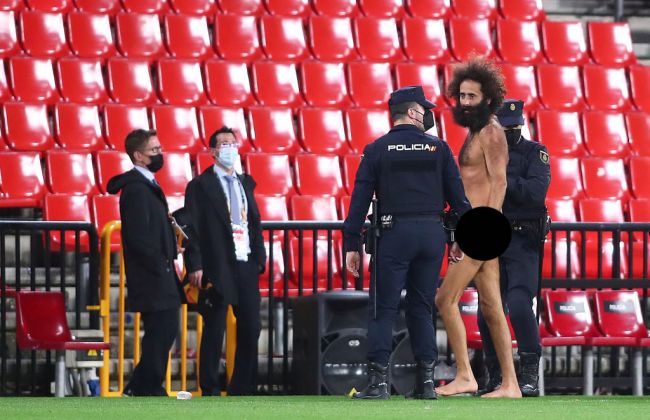 The Europa League match between Manchester United and Granada was supposed to be played without any fans in attendance, but one was able to sneak his way in, and he did so without any clothes on. He also looked a lot like Colin Kaepernick, who trending on Twitter for a brief time after photos and videos of the streaker made the rounds on social media.

As for who the man actually is, his name is Olmo Garcia, and he is a Granada native. Garcia is very well-known for walking around in public without any clothes on. According to La Voz de Galicia, he has been walking around in the nude for years and suggests that it has ‘psychological benefits’ and is good for the skin. He was eventually taken down by four officers when he made his way onto the pitch during the 10th minute. According to The Independent, he snuck into the stadium 14 hours before kickoff.

According to iNews, Garcia climbed up to one of the niches of a 16th century Granada building just sat there, taking in the sun last December. He was eventually retrieved by the fire department but was not arrested as the absence of any minors meant he was not committing any particular crime.

Garcia gained quite a bit of fame after completing the Camino de Santiago, a Christian pilgrimage ending in northern Spain, completely naked. He walked hundreds of miles in the nude, without shoes.

The man has literally made a name for himself for being naked.

Garcia was in the business world with a chemistry background before finding his new passion of walking around naked.