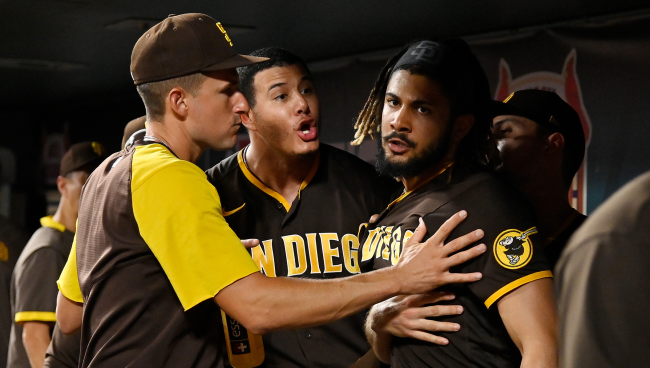 On June 1, the San Diego Padres were sitting just half a game back of the surprising San Francisco Giants with an excellent record of 32-22 (.607). Almost no one expected that to last as the Giants were, at best, the third most talented team in the National League West.

On July 1, the Padres were two and a half games back, but now they were in third place, with a still very good 49-34 record (.590), behind both the Giants and the Los Angeles Dodgers

So it’s certainly understandable when two alpha male superstar players get into it in the dugout like Manny Machado and Fernando Tatis did over the weekend when frustration boiled over.

Losing 25 out of 35 games when you are thinking that you should be contending for a pennant will do that to a guy.

Prior to Tuesday’s game, Machado and Tatis addressed their very public dustup.

“This incident happened,” Machado told the media. “We’re here to address it. It happened in the dugout in a crucial situation for us. We’ve got to apologize to the fans for (having) to see that. We handled it internally as a team. We’re the leaders of this organization and this team. With the pressure of trying to win, the emotions that go through everything — Fernando over here is about to win the MVP, we’ve got a team that is trying to compete and get to a World Series, and we haven’t been playing great baseball. So emotions got involved and (they) get the better of us (sometimes). Those are situation we learn … and we get better from that.

“We’re here to take away the distractions of this team. We’ve got bigger fish to fry. We’ve got bigger things to worry about than something that is not a big deal. We’re going to go out there and play baseball. We’ve got 13 games left. We’ve to try to win all of them to get where we want to be.”

The fight between the two Padres stars reportedly began when third base coach Bobby Dickerson told Tatis keep his head up after striking out on a called strike that he thought was a ball, according to the San Diego Union Tribune.

“It just happened,” Tatis told the media on Tuesay. “It’s part of baseball. It’s what this game brings out, especially when good players are trying to win and stuff is not going our way. At the end of the day, I’m glad it happened. I feel that brings us stronger. You go inside and talk about it and analyze it, you come together. … I feel it’s huge for us, huge for the team. We’re in a great spot.”

Padres General Manager A.J. Preller agreed with Tatis, saying, “Anytime you go through a little bit of adversity, you get better for it. It speaks to, they’re passionate, they want to win. You have disagreements with any family, then you make up and go forward. That doesn’t change how you feel about somebody. That’s just a disagreement on the bench. I think those guys handled it.”

Not everyone was buying what Machado and Tatis were selling.

So in other words they were called out by management, reamed, and have to now put on this b.s. show 🙄🙄

Most fans, however, agreed that the verbal altercation between Manny Machado and Fernando Tatis Jr. truly was no big deal.

The only people who thought this was a big deal are the people who have never played a competitive sport in their life.

Trip part is that this happens all the time. I’ve been on teams where guys got into it. Ironically, this could get them going. Kudos to them for setting things straight👍🏽

I can’t stand Manny Machado.
But he was right here, he was being a leader, showing passion for his team and now he’s handling it correctly.
Maybe Manny has finally grown up.

Machado also added during Tuesday’s interview, “We got swept by St. Louis. That left a f—ing bad taste in our mouth. So we’re here to beat Gausman tonight, win this series and win the next 13 games that are left. We need to win 13 if we want to get where we want to be.”

Unfortunately for the Padres, that didn’t happen as closer Mark Melancon gave up three straight singles in the ninth inning, allowing the Giants to take home a 6-5 win after Machado did his part by singling and hitting two home runs earlier in the game and celebrating one of them with his BFF Tatis.