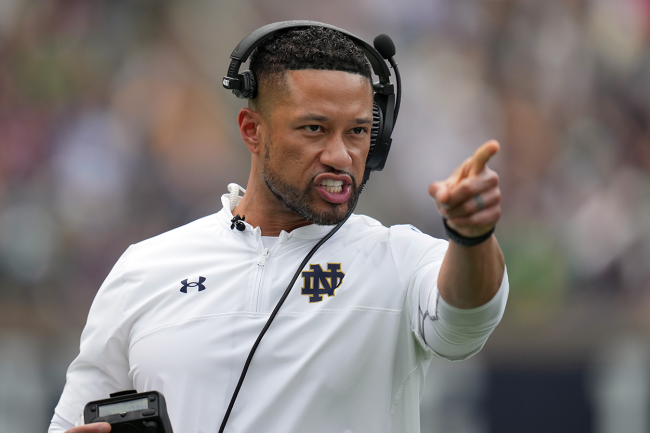 Marcus Freeman has been the head coach at Notre Dame for just over six months and has already ruffled some feathers amongst opposing fanbases around the country. However, he is claiming that the drama came from a misquote and that it’s much ado about nothing.

On Tuesday, a report from CBS Sports’ Dennis Dodd immediately made waves across the college football world. In the report, Freeman discussed the importance of academia at Notre Dame and how his school puts such a large emphasis on the classroom.

“You can’t cheat academics at Notre Dame,” he was quoted.

While that might not seem like a big deal, it was what he reportedly said next that sparked the drama. Freeman was essentially quoted as saying that academics are not as high of a priority at some schools. Many people, including the Buckeyes, seemed to take his comments as a jab at his former schools— Ohio State and Cincinnati.

Marcus Freeman’s comments on academics set off a chain reaction.

After a chaotic 24 hours surrounding his quote, Freeman clarified his comments in an appearance on The Fan 97.1 and called out Dodd for misquoting what he said. He put him on blast.

“I wanted to set the record straight. I was misquoted by Dennis Dodd in this article, and key words were missing from the quote that upset a lot of people that I care about,” said Freeman. “I’m very proud of my two degrees from Ohio State. I would never discredit the quality of education those degrees represent. I was just specifically really talking about the academic rigors of Notre Dame.”

Freeman continued on to explain the basis for his comments. He says that he was not jabbing at anyone.

“Notre Dame has 8,500 students. Online classes were not a part of the standard curriculum here. In fact, before COVID, they weren’t even offered. So, when I was first made aware of this quote making its rounds yesterday in a negative way, I was surprised,” Freeman explained. “I walked away from that interview with Dennis Dodd and had no sense of anything that I said would offend anybody. So, I asked him to share with me the audio so I could share exactly what was said.”

And to make things even better, Freeman had receipts.

“I wrote it down — here’s exactly what I said: ‘There study habits are formulated every day. You can’t cheat academics at Notre Dame. If I didn’t go to class at Ohio State, 60,000 students. Cincinnati, another big public school, there’s 40,000 students. If you don’t go to class, okay, take some online classes, show up at your final. At Notre Dame, you’re forced every day to go to class. But it formulates this work capacity, this learning capacity.’ So, the only reason Ohio State and Cincinnati were referenced was because they were large schools with large student bodies compared to Notre Dame, which is a small school at 8,500 students.”

Dodd must feel mighty silly this morning. Freeman put him in a body bag.