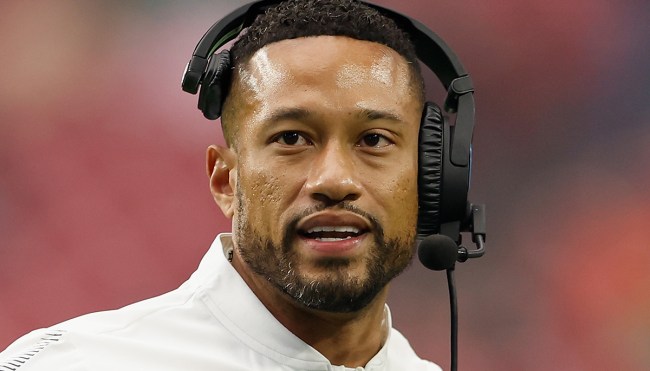 Notre Dame boasts one of the most storied programs in the history of college football, as the Fighting Irish are second only to Alabama when it comes to the schools that have won the most national championships since the AP Poll Era began in 1936.

Most Golden Domers still view the team as a perennial contender, and while that fanbase is certainly far from the only one that can be accused of clinging to glory days that are well in the past, it’s hard to ignore the fact that the Fighting Irish haven’t been able to secure a title since 1988.

If you’ve ever had the chance to discuss that particular drought with a Notre Dame fan, it’s a virtual certainty you heard them utter some variation of “academic standards” to explain why the team hasn’t been able to hang with bigger schools and programs in conferences with a reputation for Subpar Educational Criteria.

It’s the SEC. I’m talking about the SEC.

Fighting Irish head coach Marcus Freeman echoed that sentiment during a recent interview with CBS Sports, as the man who replaced Brian Kelly on the sidelines in South Bend had this to say when discussing how Notre Dame’s emphasis on education can make things a bit tricky when it comes to recruiting players and putting a roster together:

“You have to understand the value of that degree. If we’re bringing in people that can’t make it, then you’re doing that young man and our team a disservice. We’ve got to bring in the right kids…

“I’m not saying from top to bottom, but the majority of our kids, they—I want to say this the right way—are pushed to learn and their study habits are formulated every day. You can’t cheat academics at Notre Dame.”

Freeman went on to contrast his current program with others he’s previously been a part of—including Ohio State, which the former Buckeyes linebacker lumped in with Cincinnati while discussing schools that don’t take academics as seriously:

“You don’t go to class [at places like that]? OK, take some online classes, show up for your appointments.

At Notre Dame, you’re forced every day to go to class.”

It’s safe to assume Cardale Jones would disagree with the assertion that Ohio State players aren’t also forced to go to class, and while Freeman’s comments may have some merit, plenty of Buckeyes supporters weren’t exactly thrilled with his decision to use the school as an example.

Marcus Freeman has done a lot right since becoming the Notre Dame coach, but he continues to poke Ohio State.

Week 1 he will receive a lesson in why you don’t talk about other programs.

But Marcus Freeman is REALLY trying to poke the bear and I would love to see it backfire on him https://t.co/TuvFmcXcyl

I get that Marcus Freeman is trying to sell Notre Dame, but at this point I'm sick of him. Dude has been taking shots at Ohio State since he was hired.

Marcus Freeman is out of touch with that comment about Ohio State academics.

Someone like Cardale Jones wouldn’t have gotten an opportunity at Notre Dame, but tOSU welcomed him and he became a champion and a successful businessman.

“BUT THE TEST SCORES!” – every ND fan

Marcus Freeman is taking shots at Ohio State just days after Ryan Day and the Ohio State staff have an ESPN special showing what a great support system they have set up on and off the field.

To each their own I guess, but I think I prefer our coach’s approach a little better. https://t.co/z7H8GjDIia

Notre Dame and Ohio State will kick off their season against each other in Columbus on September 3rd, and that day cannot come soon enough.